Pep Guardiola poised to make a bid for Jonny Evans 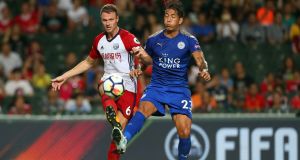 Manchester City are targeting West Bromwich Albion’s Jonny Evans in a move that could make the former Manchester United defender only the sixth footballer to represent both Manchester clubs in the Premier League era.

Evans, 29, had been identified by Pep Guardiola as precisely the kind of ball-playing centre-back the manager wants to bolster an area of the defence that lacks depth and quality. Guardiola, it is understood, has a firm interest in Evans. If City can prise the Northern Irishman away from West Brom he will be given a chance to compete for a first-team berth.

That deal cost Albion around €8.75 million as Evans was in the final 12 months of his contract at Old Trafford. He has two years left of his terms at West Brom so a bid of around €22 million may tempt the Midlands club to sell.

Last month Tony Pulis, the West Brom manager, claimed Evans would not be sold and pointed to how he was now the captain following Darren Fletcher’s move to Stoke City.

“Jonny Evans is staying with West Bromwich Albion, ” Pulis said. “There is no doubt about that. Jonny will be our captain next season. He had a fantastic year last season and I’m hoping he steps up now. He’s not had the responsibility before, to be a captain around the club.”

However, if Evans was to join City he would follow Peter Schmeichel, Andy Cole, Andrei Kanchelskis, Owen Hargreaves and Carlos Tevez as players who have also been at both clubs since the Premier League’s inception 25 years ago.

While Pulis would be loath to lose Evans following Fletcher’s departure, Guardiola’s options at centre-back are particularly limited. The captain, Vincent Kompany, has had an injury-troubled past two seasons, while John Stones and Nicolás Otamendi, the only two other front-line operators in the position, are yet to totally convince the head coach.

Guardiola’s issue at centre-half is underlined by Eliaquim Mangala’s reintroduction to the first-team squad after spending all of last year at Valencia on loan. The Frenchman cost €46m from Porto in the summer of 2014 but failed to impress, yet Guardiola named Mangala on the bench for Saturday’s 2-0 victory at Brighton & Hove Albion.

That signalled that despite his shaky City career Mangala is currently ahead of Tosin Adarabioyo and Jason Denayer.

Meanwhile, Arsene Wenger says he has made a financial “sacrifice” in deciding to risk losing Alexis Sanchez on a free transfer next summer, with Arsenal’s sporting prospects coming ahead of any off-pitch concerns.

Sanchez is likely to depart without a fee unless a new contract is agreed with the club – a situation that Wenger admits has not progressed. There has been interest in the forward from a number of other clubs in pre-season but Wenger has weighed up the pros and cons of retaining him and resolved that the football benefits he brings outweigh any potential transfer fee.

“At the moment no, because we have not progressed on that front,” Wenger said when asked whether Sanchez will sign a new deal. “He is a player who goes into the final year of his contract and prepares for the season.”

Pressed on whether that means he was willing to let the Chile international depart for nothing, Wenger continued: “That is a consequence of what I say, yes, unfortunately. But we have to make a choice between efficiency on the field and financial interest, and most of the time if you can find a good compromise it’s better. But in this case, I think I prioritise the fact that he will be useful on the sporting side.”

He admitted it was not a perfect state of affairs but left the door open for Sanchez to sign a contract that has been on the table since last season.

“Look, let’s not be wrong, it’s not an ideal situation on the financial side and it demands some sacrifice,” he said. “But first of all it doesn’t mean the players who are in the final year of their contract will not extend their contract. You have still that possibility and we work on that as well.”

Sanchez has not featured for Arsenal since last season and is currently recovering from an abdominal strain that will rule him out of Saturday’s match at Stoke. He is not the only player to have been heavily linked with a move away from the club, with Chelsea reported to be interested in Alex Oxlade-Chamberlain. Wenger was unequivocal that the England midfielder will still be at the club at the end of the season, saying he is at the start of a big phase in his career.

“Because I rate him highly and he’s one of the players who is on his way up,” said Wenger of his reasons for discouraging interest in Oxlade-Chamberlain.

“In the last year he has made huge progress and personally I want him to stay here for a long time. I’m convinced he will be the English player that everybody will look at in the next two years.”

Wenger also confirmed he intends to keep Jack Wilshere at the club despite the fact that the midfielder is another player who has entered the last year of his contract.

“I think I plan for him to be here for the whole season, after we will see at the end of the season,” he said.