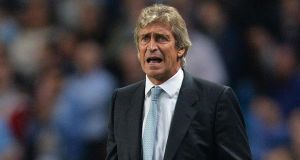 Manuel Pellegrini believes Manchester City have no advantage in playing CSKA Moscow behind closed doors and has warned his defenders they must improve.

Uefa has announced that the Russian champions will take on City in an empty Luzhniki Stadium in light of disturbances involving the Russian club’s fans at Roma a fortnight ago.

Supporters were barred from Tuesday’s 1-0 Champions League home defeat by Bayern Munich as punishment for behaviour during the visit of Viktoria Plzen in last season’s group stage.

City travel to Moscow on October 21st after claiming only a point from their opening two games.

City have conceded seven goals in five matches, and Pellegrini admits the defence needs to tighten up.

“One of the things we did last year was improving clean sheets. We had a second half of the season with a lot of clean sheets, but at this moment last year we conceded more goals. But we cannot concede five goals in three games. We scored seven and we draw two games and won one, but it’s too much.”

“Mangala was not out because he made a mistake against Hull. I thought for that game it was better for [Martin] Demichelis as they are going to play without a striker because Totti plays always as a midfielder.” Guardian Service