Paul Pogba: ‘It is a pleasure to play again’ under Solskjær

Midfielder praises interim manager and says he was ‘in the shadows, on the bench’ 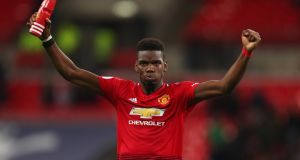 Paul Pogba has paid tribute to Ole Gunnar Solskjær for bringing the sunshine back to his life at Manchester United. “Before the coach arrived I was in the shadows, on the bench, and I accepted that,” he said. “It is a pleasure to play again. Now I am always smiling.”

The Frenchman’s charismatic performance at Tottenham, coming from a positive place and more proactive position, was one of the catalysts of United’s most impressive victory since Solskjær took over.

The feelgood factor is evident for Pogba, who giggled when he recalled the nickname the youth prospects all knew about when Solskjær worked with them a few years ago. “It’s a pleasure to be reunited with him. I knew him from the academy and the reserves, when his nickname was ‘Supersub’. He is doing a really good job. As a player he knew the mentality of this club. He has come back to help us and it is going very well.”

Performance levels have been much-improved across the pitch, from the imperious David de Gea, via the tactically astute Ander Herrera protecting from deep, through Pogba’s infuence and forward to Marcus Rashford, whose finishing looks inspired at the moment. “Throughout the training sessions in Dubai he’s been practicing his finishing with the manager,” said Jesse Lingard. “It’s prepared him for big games and moments like that.”

De Gea underestandably dominated the limelight with one of those flawless exhibitions of the goalkeeper’s art and Lingard was quick to urge the Spaniard to extend his stay at Old Trafford beyond 2020.

“We want him to stay,” Lingard said. “Having a keeper like that gives you extra confidence. They looked like scoring but he saved us. Some of his saves, you’re like: ‘Oh my god.’ He’s one of the best keepers in the world, if not the best.”

Tottenham are focusing on picking themselves up from this setback, though they face a period without two talismanic players, Harry Kane and Son Heung-min. Son is joining up with South Korea at the Asian Cup while Kane suffered an ankle injury against United, though the prognosis remains unclear.

“These two guys are just massive for us,” said Jan Vertonghen. “Especially over the last couple of months, they’ve been immense. We hope they’ll both be back soon. It’s one of those things but that’s why we have the other guys, the other guys have to stand up now.” – Guardian service