Pádraig Amond and Newport dump Leicester out of the FA Cup 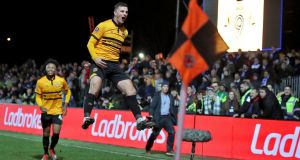 The magic of the FA Cup is alive and well in this corner of south Wales. Newport County, 74 places below Leicester City on the league ladder, served up one of those famous giantkillings that will be talked about for years to come as Jamille Matt and Padraig Amond scored the goals that inflicted a humiliating defeat on Claude Puel’s side.

There were wild and raucous scenes at the final whistle as Newport celebrated their first victory over top-flight opposition in the FA Cup since 1964. Michael Flynn had told his side that this tie was a “free hit” and his players followed that message to the letter as they showed tremendous courage and spirit.

Rachid Ghezzal threatened to spoil the party when he equalised with eight minutes remaining – exactly the same moment when Harry Kane scored here last season to earn Tottenham Hotspur a 1-1 draw – but Newport were not finished. Marc Albrighton’s handball three minutes later gave Amond the chance to convert from and the forward held his nerve, sending Danny Ward the wrong way.

What a chastening experience for Leicester and in particular Puel, who seems to be forever taking one step forward and two back. His decision to make seven changes to his starting XI will come under scrutiny, especially with Jamie Vardy nowhere to be seen, although the truth is that Leicester should still have had more than enough quality and experience on the pitch to see them through.

This was classic FA Cup third-round territory in so many ways. Rodney Parade was packed to rafters, there were rugby markings on a pitch that looked a little bare in places, and the atmosphere crackled under the lights as the home supporters cheered every header, block and tackle. Throw a weakened Leicester team into the mix and an early Newport goal, and all the ingredients were there for an upset.

There were only 10 minutes on the clock when Matt put Newport ahead with a towering header. Robbie Willmott, who wreaked havoc against Leeds in the third round last year, was the architect with a lovely piece of old-fashioned wing play. Skipping past Christian Fuchs, whose name was rather unfortunately misspelt on the teamsheet, Willmott delivered a terrific cross on the run that exposed Wes Morgan’s poor positioning. The Leicester captain was caught ball-watching as Matt escaped his marker before heading home off the far upright. Cue delirium in three quarters of the stadium.

Leicester should have levelled eight minutes later. Fuchs cut the ball back for Albrighton and the winger’s goalbound shot was deflected over the bar by some brilliant last-ditch defending. From the corner that followed Shinji Okazaki somehow headed wide after the ball was nodded back across goal and at that point Leicester could have been forgiven for wondering whether this was going to be one of those nights.

Despite that scare, Flynn’s team continued to attack and create chances. Matty Dolan’s 25-yard free-kick was clawed away by Ward, who started in place of Kasper Schmeichel. The Newport midfielder saw another effort, from a well-worked short-corner routine, repelled by Ward, then Matt came agonisingly close to connecting with another cross, this time from Amond.

As well as Newport were playing – Flynn’s players worked tirelessly in the opening 45 minutes – Leicester looked ragged come the end of the first half. Okazaki, running onto a low cross from Fuchs, saw his shot blocked by Mickey Demetriou but Newport were generally doing a reasonable job of frustrating Leicester. The fact that Kelechi Iheanacho had touched the ball four times fewer than his own goalkeeper in the opening half an hour said it all.

Okazaki’s miserable half was complete when he picked up a yellow card and it was no surprise that James Maddison replaced him at the break. Leicester started to push Newport deeper and deeper. Iheanacho saw his far post header from Ghezzal’s cross saved by Joe Day, then Albrighton struck the top of the crossbar with a 20-yard shot. Unlike in the first half, Newport were now pinned in and the question was whether they could hold out. A mistake by Demetriou gifted a chance to Iheanacho, who took on a first-time volley on the turn when he probably had time to control the ball. His shot flashed beyond Day’s far upright and the home supporters breathed a sigh of relief.

By now Puel had brought on Demarai Gray for Danny Simpson as Leicester continued to press. Newport’s defending was becoming increasingly desperate and in that respect it was no real surprise when Leicester equalised. Day produced a fine save to thwart Maddison but Ghezzal dispatched a loose ball from about 20 yards into the top corner with a wonderful strike. Newport would probably have settled for a draw at that stage but Amond’s penalty, following Albrighton’s handball, restored their lead and took them into dreamland.