Old Trafford stunned into silence by Darren Bent and Fulham 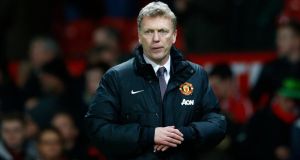 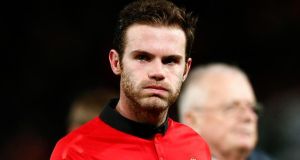 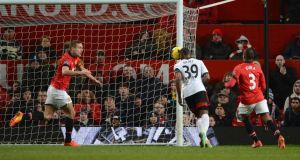 For too long this appeared likely to be written up as the nadir of Manchester United’s most difficult of seasons.

To lose with a side parading Juan Mata, Wayne Rooney and Robin van Persie to a bottom-placed club with only one win in their previous eight outings would have caused the darkest of glooms to descend on David Moyes and his band of struggling champions.

He will still face an onslaught of questions, though, after Steve Sidwell’s opener appeared to be answered by late goals from Van Persie and Michael Carrick to give United – and the manager – much needed respite.

Yet Darren Bent’s 94th-minute equaliser again exposed United’s soft underbelly and now turns the conversation to whether it will be Europa League football they play next season.

Van Persie’s leveller was a close-range effort turned in from a Mata ball, Carrick’s finish a deflected 20-yard shot that sent the midfielder, his team-mates and Old Trafford into a delirium that spoke loudly of the desperation that had been proving ever more oppressive.

The familiar sound of the alarm bell that has rung too many times here this term had been sounded by Sidwell’s strike on 19 minutes. As is now the established story this year United fell asleep with Darren Fletcher in the deepest slumber as the Scot failed to track the Fulham skipper’s surge into the area. Lewis Holtby found Sidwell with the sweetest of passes over the top for the midfielder to bury the chance past David De Gea.

Moyes’s side had a gilded opportunity to level almost immediately yet when Rafael da Silva’s cross looped onto the usually lethal left boot of Van Persie the Dutchman skied horribly from around two yards out.

Already this had become a siege on the Fulham goal with a concerned Moyes having taken up position in the technical area. He watched on as a 20-yard Carrick volley narrowly missed to the left of Maarten Stekelenburg and Rooney, Van Persie, Ashley Young and Nemanja Vidic huffed and puffed but failed to secure the equaliser.

If one sequence suggested this might not be - again - United’s day it was when Carrick unloaded a bullet through a crowded area that Stekelenburg somehow saved, Van Persie’s follow-up was deflected for a corner, and from this, Vidic clear header when straight into the goalkeeper’s hands.

Before this Fulham should have doubled their advantage and United’s woes. From a United corner Kieran Richardson passed out to Muamer Tankovic and the forward raced 70 yards. He slid ball back to Richardson and from close range the wideman blasted over.

This all left Moyes needing some inspirational words at a break United entered having put in 46 crosses so far, though not all were up the requisite standard.

There was more of the same as the second stanza began. Rafael skied an attempt from the right before United put together an impressive passage of play. Mata, who appeared wasted in a wide right berth, picked up the ball there and swept over a fine 40-yard diagonal pass to Van Persie. The forward motored down the left and when he rolled the delivery over Rooney was unlucky not to connect.

The sense that a United strike was surely incoming was heightened when the Liverpudlian forced a brilliant reflex save from Stekeleburg whose performance was of a man-of-the-match standard.

It was the Dutchman who again saved Fulham by keeping out Rafael’s stooping header and an increasingly worried Moyes acted on the hour by taking off Fletcher and bringing on Adnan Januzaj.

Further changes introduced Javier Hernandez, for Young, and Antonio Valencia for Rafael, as Moyes urged his team to throw the kitchen sink, the living room and the whole house at Fulham in a barrage that, finally, proved not enough for all three points.