Mourinho would block Cech move to rivals – if he could 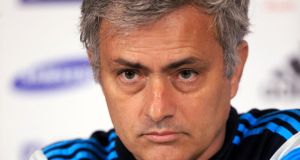 José Mourinho would block Petr Cech from moving to a rival Premier League club, if the decision were up to him.

The Chelsea manager said he would ideally retain Cech for the final year of his contract – even if it meant keeping the goalkeeper against his wishes – and made it plain that he did not want to see him join another English team.

Arsenal have explored the possibility of taking Cech and believe a deal could be put in place in the summer. A host of other clubs are also interested in the 32-year-old, among them Paris St-Germain.

Cech enjoys a close personal relationship with the club’s owner Roman Abramovich, who is inclined to allow him to chose his next club.

A move to Arsenal might appeal as Cech would not have to uproot his family from London.

“I think that the club is more important than the player and, as was true this season, the club needs two very good goalkeepers. Without Petr this season, I don’t think the club would be champions because he played six important matches in the Premier League.

“For me, decision number one, Petr will stay. After that, second point, to go but not in England. The option I don’t want is for him to go to an English club. But, I repeat, I am just the manager and he means so much for this club, I think he deserves everything from this club.”

City were knocked out of the Champions League 3-1 on aggregate by Barcelona, who dismantled Bayern Munich 3-0 in Wednesday’s semi-final first leg with Messi in breathtaking form, scoring twice.

Asked how long City or any English cub may take to close the gap to Barca, Pellegrini said: “First we need to find another Messi. He makes the difference, like Ronaldo at Real Madrid. The project at this club is to improve every year.”

Agüero is the Premier League’s leading scorer with 22 goals, despite struggling with injuries. Pellegrini mentioned Messi, Luis Suárez, Neymar, Sergio Busquets and Andrés Iniesta at Barcelona and said: “Maybe next year we’ll see another Kun [Agüero] because he is working, growing every year. I hope he will be as important here as those players are at Barca.” Guardian Service