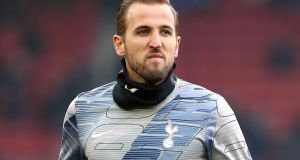 Tottenham Hotspur’s Harry Kane: ‘We expect him to be out until mid-April, end of April, May, next season, I don’t know,’ said Spurs manager José Mourinho. Photograph: Mark Kerton/PA Wire

José Mourinho has cast doubt on whether Harry Kane will be available again this season or for Euro 2020, raising the prospect the Spurs and England striker may not return from hamstring surgery until the 2020-21 campaign has begun.

Tottenham have outwardly been expecting Kane to recommence full training in April but Mourinho’s comments, which came as a surprise towards the end of a press conference otherwise dominated by Christian Eriksen’s future, suggest the situation is not that straightforward. Kane was already certain to miss at least 12 more games between Tuesday night’s FA Cup third round replay with Middlesbrough and early April, and any prospect of a significantly longer absence would be another blow in a troubled season.

“We try the best we can,” Mourinho said when asked if there was any update to the timeframe for Kane’s absence. “News on Harry we don’t have, and if you ask me every time we come here the answer will be the same. We expect him to be out until mid-April, end of April, May, next season, I don’t know.”

Kane underwent surgery on Saturday and looked positive enough on photographs posted to social media later that day, which showed him giving a thumbs-up sign while his leg was in a brace. “Surgery went very well. First day of recovery starts now!” he wrote alongside those images, but there will now be added concern about his condition for the start of the European Championship.

England’s first group stage game is against Croatia on June 14th, and if he is still on the sidelines come May – far from the worst-case scenario if Mourinho is to be believed – then England manager Gareth Southgate may be faced with a tough decision about the extent of his captain’s participation.

I know clearly that a player in this situation, it is normal he doesn’t perform at the highest level

It is far from the only personnel matter plaguing Mourinho, who is having to manage Eriksen’s situation on a game-by-game basis at a time when – as he emphasised repeatedly – Tottenham’s resources are already stretched. Eriksen, whose contract expires this summer, has been offered a four-year deal by Internazionale and could move on as soon as this month. The reception Eriksen was given by a section of the club’s fans upon being substituted against Liverpool on Saturday, when he was jeered off following a sub-par personal performance, provides an added complication should he stay. According to Mourinho, the uncertainty surrounding Eriksen is preventing the playmaker from playing at his maximum.

“If you ask me if I think this is the best Christian Eriksen, I have to be honest and say no,” he said. “If you ask me if I know the reasons, I am not an idiot, I have been in football for many years. I know clearly that a player in this situation is not a player that – even if he wants, I am not blaming or criticising the player – it is normal he doesn’t perform at the highest level.

Mourinho said he knows what Eriksen’s future holds but that it is for the player to divulge that information. For now he has little option but to use the Denmark international, who will be part of the squad that faces Boro. He made a pointed request that supporters back Eriksen in the meantime.

Some players become better with bad reactions from their own fans, they feel that as a factor of motivation

Some players might be cowed by opprobrium from the stands but Mourinho believes it depends on the individual. “Not every player is the same,” he said. “Some players become better with bad reactions from their own fans, they feel that as a factor of motivation. With some others, of course, it affects them. I have to go in the direction that I coach my team and I have to try to do the best for the team, that’s the only thing I can say.”

Toby Alderweireld is the only fit first-team player who will be given Tuesday night off. Mourinho said Spurs are “at our limit” in midfield and attacking positions, with Tanguy Ndombele and Moussa Sissoko both recovering from injuries too, and stressed his resources cannot be compared with those at the top end of the Premier League.

“[Hugo] Lloris was a long injury, then Harry, then Moussa, Ben Davies, everything is long,” he said. “It’s not like you are waiting for somebody to come back next week, or Sissoko in two weeks. It’s not in two weeks, it’s in three or four months, who knows?

“We cannot have a squad like some other teams. It’s not us. Yesterday, I was watching Man City and I looked to the bench – Sterling, Bernardo Silva, Gündogan, Otamendi. You know? Liverpool, you see the team, you see the bench. And they have Matip, Lovren, Keïta, Fabinho injured. I’m not jealous, I have an amazing job, but they are different jobs.”

The Benfica midfielder Gedson Fernandes is expected to add to Mourinho’s options in the next 24 hours, signing an 18-month loan deal after undergoing a medical.