More to Liverpool than ‘Fab Four’ up front, says Klopp 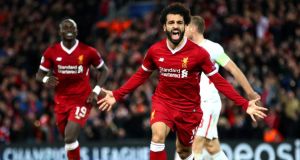 Jürgen Klopp has warned Everton they will have more to contend with than Liverpool’s outstanding attacking quartet tomorrow as he attempts to equal a Merseyside derby record.

Liverpool are unbeaten in 14 matches against their local rivals and can equal a club record of 15 consecutive derbies without defeat, set in the 1970s, against Sam Allardyce’s team at Anfield. Everton’s dire return there fuels Liverpool optimism – they have not won across Stanley Park since 1999 – but it is the devastating form of Mohamed Salah, Philippe Coutinho, Roberto Firmino and Sadio Mané that has given Klopp’s team impressive momentum going into the game.

The four scored in the 7-0 Champions League rout of Spartak Moscow on Wednesday and have scored 46 goals between them in all competitions this season, 11 more than the entire Everton team, but Klopp insists there is far more to his side than a mesmerising attack.

“I have no problem with nicknames like the Fab Four but it’s disrespectful to all the other players,” the Liverpool manager said. “We played a fantastic game at West Ham and Alex Oxlade-Chamberlain was involved. We didn’t have Adam Lallana so far and I think he would fit fantastically in each boy group or band in this world. We also have Daniel Sturridge and Dom Solanke.

“For sure we had to show a reaction after Tottenham [Liverpool’s last defeat]. We have played really good football this season without always using the situation. In the last few weeks it’s been something like 66 shots and 33 goals. Before that we had the same number of chances and didn’t score. We didn’t have to change a lot but we had to change a few decisive things and the main thing was defending as a team. It is our job to make sure you don’t discuss our defence all the time. There are 500 situations in a game but we were always talking about one or two.

“For the world the best thing was how we finished the game [against Spartak] but for me it was that we were 1-0 up but still compact. That is how we have to be. It was a job we had to do.”

Klopp is the only manager in Liverpool’s history to win his first three derbies and, although he insists there is “no secret” to how an Allardyce team will play, he claimed Everton would be a tougher proposition than Spartak Moscow under their latest manager.

“This is a derby at its best and I like it,” he said. “There’s a lot of respect between the clubs and I really like that. In the game we try everything to win it but around the games we live in one city and there’s enough space for supporters of both clubs. I meet a lot of Everton supporters, all day, and I have no problem with that but in the game I want to see only us at our best.”

Klopp confirmed Alberto Moreno requires a second assessment of the ankle injury suffered against Spartak, amid concerns the left-back could be sidelined until the new year with damaged tendons.

“So far it could be everything,” the manager said. “I cannot say much about it. It’s a very rare thing. So far the specialists aren’t sure but if it’s a week or a little bit longer we have to wait for that. There’s a little damage around the tendons.”