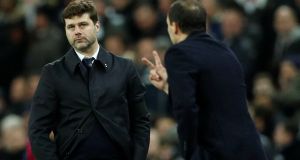 Mauricio Pochettino has described Juventus as “specialists” in football’s dark arts and a club that has “the habit to put pressure on the referee”. The Tottenham Hotspur manager reflected on the 4-3 aggregate defeat against the Italian team in the Champions League last 16 and he felt that his side had enjoyed the better of the two legs on the field. Away from it, where Pochettino said a different game had taken place, it was another story.

Pochettino said he had seen the Juventus owner, Andrea Agnelli, and the chief executive, Guiseppe Marotta, in the tunnel during the second leg at Wembley – which Juventus won 2-1 – and how “at half-time they put pressure on the referee”.

Juventus had been incensed by the decision of the Polish official, Szymon Marciniak, to ignore a stonewall penalty for Douglas Costa in the 17th minute, following a challenge from Jan Vertonghen.

Pochettino did not criticise Juventus for their efforts to gain an edge; rather, he admired them. He said they had given Tottenham “a massive lesson in how to behave”.

“If we only see the stats from the two games, Tottenham was much the better team,” Pochettino said. “But in football, it’s not only about a better performance, stats, more shots on target or to have more possession. It’s small details. Competitions demand different things. Juve are specialists, because they have the habit to win, the habit to put pressure on the referee.

“The owner [Agnelli] stayed in the tunnel before and during the game. It’s a club with a culture to try to do everything to help the team. It’s a massive opportunity to learn not only on the pitch but outside it. It’s two games against this type of club – one on the pitch, one outside of the pitch.

“I don’t say that Daniel [Levy, the Tottenham chairman] needs to be there [in the tunnel]. Only that Juventus was a massive lesson in how to behave. Before the game was Agnelli. After the game was Agnelli, Marotta. I saw at half-time how they put pressure on the referee. It’s about small details that count a lot in this type of game – even games that both teams can win. I believe those details can help the club to achieve what we want.”