Manchester United deliver three points in yet another enigmatic display 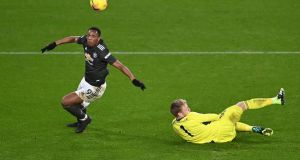 What to make of Manchester United this season? An away victory that featured the customary concession of the opener lifts Ole Gunnar Solskjær’s side into sixth place on 23 points and their game in hand means they could be in outright second if they win it.

Yet while United hardly perform in scintillating style from kick-off to final whistle this was a sixth unbeaten Premier League match, including five wins. Sheffield United entered the contest with only one point and finished the same and while their visitors stuttered at first, then suffered a late scare, they did end up defeating the division’s bottom team as any title pretender surely must.

The Blades lined up in a 5-3-2 that had David McGoldrick and Oliver Burke in attack as Chris Wilder sought to arrest a dire run of 11 losses from 12 league matches and avoid a club record of eight straight defeats.

Solskjær’s headline move was to prefer Dean Henderson for David de Gea in goal, the former having spent two years on loan at Bramall Lane, with the manager saying this was no reflection on the Spaniard who had played “really well against Man City” in Saturday’s goalless derby.

Henderson was soon to perform less well in a disastrous start for the visitors. The hosts forced a corner through Sander Berge on the right, and after John Fleck dropped it into a crowd in front of Henderson, he punched away. Then calamity struck.

When Victor Lindelöf took a short free-kick awarded for offside to Henderson he relayed possession left across the area to Harry Maguire. The captain returned it and the No 1 dawdled too long: Burke charged Henderson’s clearance down and flicked a pass to McGoldrick, the former Ireland striker smashing home his fourth goal of the season.

It was Manchester United’s latest dismal start to an away match: the sixth successive time in the league they conceded first. Again they had to come from behind.

On witnessing Henderson’s farcical play Solskjær had turned to his bench in dismay, and he might also have rued his inclusion of the 23-year-old. Wilder’s men were in charge. Aaron Wan-Bissaka had a pass smothered, Fleck shot just wide of Henderson’s right post, and United were unable to gain control or assert any rhythm.

Paul Pogba and Nemanja Matic were invisible in midfield, and when Marcus Rashford dropped deep to collect and run at United he met a red-and-white striped wall, Wilder’s five-man defence functioning as required.

Solskjaer’s men needed a moment of brilliance and when Lindelöf chipped over the top for Rashford the forward produced a sublime first touch, followed by an emphatic finish beyond Aaron Ramsdale.

Next, Martial appeared certain to break his duck in the league when Bruno Fernandes played him in, only for John Egan to hook clear. The Frenchman did not have to wait long, though, to finally record a first league goal. This derived from a brilliant no-look Pogba pass that bypassed the Blades’ defence and found Martial, who finished.

Suddenly Manchester United were 2-1 up and Rashford was racing on to a Martial pass and though his left-footed shot was straight at Ramsdale, United ended the half the happier side.

Perhaps with a Solskjær flea in the collective ear they were far brighter at the start of the second period. Matic found Fernandes expertly, Mason Greenwood claimed a free-kick, and, then, United had a third.

This was a sweet sequence that featured a Pogba pirouette in his own half before the ball went via Fernandes, Greenwood – who was fouled – back to Fernandes, and Martial, whose mis-control of the ball tapped it inadvertently to Rashford and he unloaded under Ramsdale for 3-1.

Pogba had created two goals in the classic Pogba manner: via the elevated skill only the very best have. Eyebrows had been raised when he was chosen ahead of Donny van de Beek yet his display vindicated Solskjær’s decision. The Frenchman was running the contest as Fernandes often does for United – demanding the ball and using it destructively while inspiring team-mates.

They were playing inside Sheffield’s half, pinging passes around like the proverbial training-ground exercise. Fernandes came close to putting Juan Mata – on for Greenwood – in, while Martial’s link play was as encouraging as his goal. But, then, Lindelöf headed a corner against McGoldrick and this somehow beat the hapless Henderson. The dismal run continues for Wilder and his men. United hung on, but they remain an enigma. – Guardian