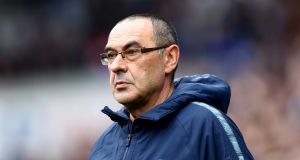 Maurizio Sarri: “I am not able to understand the decision of the Premier League because we go to Prague as an ‘English team’.” Photograph: Michael Steele/Getty Images

Maurizio Sarri has dismissed as “strange” the Premier League’s attitude towards English clubs’ European commitments as Chelsea prepare to rotate their selection with one eye on their Europa League quarter-final against Slavia Prague.

Sarri said he will be forced to juggle his resources with West Ham due at Stamford Bridge tonight before the game in the Czech Republic on Thursday. Slavia played Dukla on Saturday to give them time to recover and prepare. Sarri will have one full training session before travelling on Wednesday.

That will influence selection for tonight’s derby, with Sarri conscious that his players follow that game in Prague with a match at Liverpool on Sunday. He has been led to believe the club made representation to the Premier League to play their fixture against West Ham over the weekend.

“I think the [Premier League’s] answer was that, also in the Champions League, the English teams have only three days to prepare. It’s not just about helping us but all the teams involved in Europe. They could have done more for the English teams in Europe. In Serie A, teams play on Friday. Teams involved in the Europa League away from home can ask to play their next Serie A match on Monday.”

The head coach conceded it would be impossible to field an unchanged team for the forthcoming fixtures.

Mateo Kovacic, on loan from Real Madrid, is likely to deputise for Jorginho in at least one of the matches, with Sarri keen to make his move permanent at the end of the season. That would be dependent upon Chelsea either successfully appealing against, or delaying, the two-window transfer ban Fifa intend to impose in the summer.

“I’d like very much that Kovacic will stay with us,” Sarri said. “In that position, we have some problems because we have only Jorginho. Kovacic could become a very good central midfielder and I want to try him there.”

Felipe Anderson and Samir Nasri will return from injury for West Ham when they face the Blues at Stamford Bridge tonight.

West Ham midfielder Jack Wilshere made a return from injury as the Under-23s won 1-0 against Leicester in a PL2 game at the London Stadium yesterday.

The former Arsenal and England player, who has been sidelined by two ankle problems this season, has played just eight minutes as a substitute for the first team since September.

Wilshere came on in the 3-0 Premier League victory over Newcastle at St James’ Park in December but has since been out of action.

Pellegrini has been keen to get Wilshere, who has been training with the under-23s for the last fortnight, back in action and the midfielder started the game against Leicester.