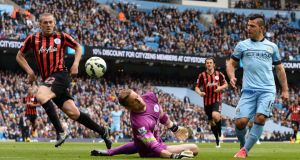 When the endgame arrived, QPR politely ushered themselves out without barely a flicker of resistance. No arguing at the door, no recriminations or any real sense that they expected anything else. The worst team in the Premier League fetched their coat and left the premises and it wasn’t particularly easy to imagine they might be back any time soon.

QPR look a good fit for the Championship if they can fold this meekly and really did believe that Clint Hill, Bobby Zamora and Karl Henry were the men to keep them in the top division. “He was here when we were shit,” the home fans sang about Richard Dunne, the one-time Manchester City captain and prolific own-goal connoisseur. They meant it affectionately but, in another sense, it says something that the man assigned to subduing Sergio Agüero once went by the nickname of Honey Monster on this pitch, back in the days when the curtains trembled.

That particular battle was predictably one-sided as Agüero’s hat-trick moved him to 31 goals for the season, his best-ever total at City despite his recurring injury problems. QPR’s wage bill in the last few years has been higher at times than that of Atlético Madrid and Borussia Dortmund, both recent Champions League finalists – and not far off the entire total of Major League Soccer. Yet the lack of stardust in this team is staggering and, if anything, it was just a surprise City did not turn their superiority into an even more emphatic thrashing.

For that, QPR were indebted to Rob Green’s goalkeeping, particularly when David Silva ran through, one on one, in the second half. Green was exposed more times than he will want to remember and the second goal in particular said so much about the chaos of this QPR team. City had actually been defending a corner when the ball was half-cleared and Silva tried to release Agüero. Silva, for once, did not get his pass right but Yun Suk-young allowed the ball to go under his foot and Agüero was free to run clear and slip the ball past Green. It was not the mistake that was incredible; it was the fact that Yun, playing on the left wing, was the only QPR man back.

Agüero had opened the scoring after four minutes with another goal that exposed the vulnerabilities that have attached themselves to QPR all season and, after that, Manuel Pellegrini’s team played with so much authority it made it feel slightly implausible that their title challenge faltered after the turn of the year. An allowance has to be made for the moderate standard of opposition but this was City playing with the crisp, stylish, penetrative football that makes them a joy to watch on the good days.

Agüero’s first goal was the culmination of a cutting, diagonal run, right to left, into the penalty area, eluding Hill first and then taking advantage of a half-hearted challenge from Matt Phillips and a lucky ricochet to clip his shot over Green.

Aleksandar Kolarov made it 2-0 before the interval with a free-kick from nearly 30 yards out, after Dunne had taken Agüero down, and then it was just a question of how ruthless City were feeling and the scale of the away side’s capitulation. At one point Joey Barton, supposedly the heart and soul of this QPR team, gave the ball away with a sloppy pass from the wing and then simply stood still in the manager’s technical area as play went on.

By that stage Agüero had already completed his hat-trick, firing the ball to Green’s right after Williams had brought down Silva for a penalty that might have brought him a red card if the referee, Mike Dean, had not perhaps decided it was a day for leniency. Six minutes later, Kolarov swung in a corner. The substitute Wilfried Bony headed on and Agüero was at the far post to slide the ball across the six-yard area and leave James Milner with a tap-in.

Bony struck the post with a shot of his own before playing in Silva to go round Green and finish the scoring five minutes before the end.

Shortly before, Shaun Wright-Phillips had come on to cheers from the supporters of his old club and abuse from the away end. QPR are a mess and it might have to get worse before it gets any better.