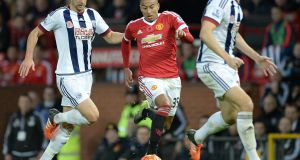 Jesse Lingard came in for high praise from the Manchester United manager after his goal against West Brom on Saturday. Photo: Oli Scarff/Getty Images

Manchester United manager Louis van Gaal admits he is likely to face some disappointment in his hunt for new recruits during the next transfer window.

United remained fourth in the Barclays Premier League table after a 2-0 win over 10-man West Brom on Saturday.

Van Gaal’s men are four unbeaten in the league and if they beat PSV Eindhoven after the next international break, they will qualify for the knockout stages of the Champions League.

But despite Anthony Martial’s impressive start, the team’s excellent defensive record, and Jesse Lingard’s emergence, Van Gaal is not totally happy with his squad.

Lingard and Juan Mata provided the goals at Old Trafford on Saturday, but they are not quite quick enough for the United manager.

“I have said already in my first year many times we need speed and creativity on the wings,” Van Gaal said.

“So first we must first finish that problem and then we can see how we play and how we are in balance with playing with speedy wingers.”

Van Gaal has dipped into the youth squads to fill the gaps left by injuries.

Andreas Pereira has played three times, Axel Tuanzebe was part of the squad for last month’s draw at Crystal Palace and Cameron Borthwick-Jackson became the 29th United player to make his debut under Van Gaal on Saturday.

Van Gaal has also put his faith in Lingard following Memphis Depay’s lacklustre start to life at Old Trafford, but despite his pride at fielding youth players, Van Gaal concedes he may still have to enter the transfer market in January.

The Dutchman has plenty of targets, but admits he will struggle to land some of them.

“No, it is dependent,” Van Gaal said when asked if the emergence of these youngsters would stop him buying new players in January.

“It is dependent for instance on the rehabilitation of Luke Shaw — how long it will last.

“It is also dependent on what I can buy. I want to buy a lot of players but not all the players I want are for sale. So there are a lot of factors in it.”

Lingard will never forget the moment when he cushioned Chris Brunt’s poor clearance and slotted the ball into the far corner before racing away to celebrate in front of the Stretford End on Saturday.

Warrington-born Lingard said: “It was pure happiness. My mum, brother, dad and girlfriend are here so it put a smile on their faces.

“They are really proud of me. I think my girlfriend has recorded it so I will watch it again later.”

Having been at United for 15 years, he is technically the longest-serving player at the club.

“I have been here since I was seven so obviously to come through the ranks and play for your boyhood club is a dream come true,” he said.

Lingard suffered a knee injury on his debut against Swansea last season and was then loaned to Derby.

While the likes of Adnan Januzaj and Will Keane were allowed to leave on a temporary basis this summer, Van Gaal had no intention of letting Lingard leave.

“I said to some of the other young boys they could go on loan at the start of the season, but I said to him: ‘you have to stay!’,” Van Gaal said.

Lingard’s goal could have been cancelled out swiftly had Saido Berahino not headed over from six yards.

”If there’s a guy you want it to drop to then it’s Saido. He seems to duck his head and he should have let it hit his forehead,” Tony Pulis said.

Albion ended the match with 10 men after Gareth McAuley was sent off for bringing down Martial in the box. Mata converted the penalty.

Pulis accepted Mike Dean had to send McAuley off as he was the last man.

”I can have no complaints with (the penalty and sending-off) according to the letter of the law,” the West Brom boss said.

2 Tennis’ uncomfortable truth: Djokovic might be greatest of them all

4 GAA is expected to allow temporary replacement for head injuries