Liverpool run riot at Brighton to jump into top four

Philippe Coutinho, Roberto Firmino and Emre Can were all on the scoresheet 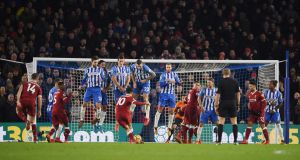 The Brazilian duo, ably assisted by Mohamed Salah, tore the Seagulls to shreds in a thumping 5-1 victory.

Emre Can opened the scoring before Firmino added a quickfire second and then doubled his tally in the second half.

Glenn Murray pulled one back from the penalty spot but Coutinho hit the fourth and then forced an own-goal from Lewis Dunk to complete the rout.

Injuries and illness had forced Jurgen Klopp to play with two midfielders, Can and Georginio Wijnaldum, alongside his only fit centre-half, Dejan Lovren, in a makeshift back three.

But when the Reds boss has a front three in this kind of form he could probably dispense with centre-backs altogether.

Since losing heavily to Tottenham in mid-October, Klopp’s side have now taken 16 points from a possible 18.

It was not all plain sailing on the south coast, though. Liverpool’s unfamiliar rearguard got themselves into a mess after a quarter of an hour to almost gift Brighton a shock lead.

Wijnaldum’s pass was intercepted and the ball was moved out to Chelsea loanee Izzy Brown on the left wing, but Murray could not convert his cross.

At the other end Brighton were holding firm despite the constant probing of Salah and Coutinho.

So manager Chris Hughton will have been hugely frustrated that they fell behind to a regulation set-piece, Can nodding in Coutinho’s corner on the half hour.

Salah led the charge before feeding Coutinho, who swept a first-time cross in behind the Brighton defence for Firmino to tap in from six yards.

Moments after half-time Brighton should have scored when Murray met another Brown cross but Simon Mignolet somehow kept the ball out at point-blank range.

And Brighton were immediately, and brutally, exposed once more as Salah went marauding up the field, taking four home defenders with him before slipping the ball to the unmarked Firmino to hit number three.

The Seagulls did get on the scoresheet when Jordan Henderson fouled Shane Duffy at a corner and Murray tucked away the penalty.

They almost set up a nervy finale when substitute Jose Izquierdo wriggled into the area but Trent Alexander-Arnold’s last-ditch challenge saved the Reds.

Instead Coutinho secured the points when he cheekily rolled a free-kick under the wall, and then saw his shot deflected in by Dunk to complete the scoring.