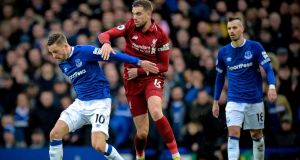 Jordan Henderson was unequivocal about how Liverpool would handle the slip from leaders to chasers in the title race. “It will not change our mindset,” the Liverpool captain said at Goodison Park where, on the streets outside, Evertonians rejoiced not in a goalless draw from the 233rd Merseyside derby but depriving their rivals of two precious points in pursuit of the Premier League crown. The midfielder’s message was upbeat but not reassuring. It is form, not mindset, that Liverpool need to change.

These are strange times for Jürgen Klopp and what seems his weekly appeal for calm and perspective around Liverpool’s prospects. Between two goalless draws away at Manchester United and Everton, decent and not unusual results in most seasons, stood the 5-0 trouncing of Watford, Liverpool’s biggest victory of the campaign and an exhibition to banish talk of “bottling it”.

Four days later that creativity, inspiration and penetration were lacking in the face of an impassioned Everton team and crowd up for the task of stopping their neighbours. Goodison is an awkward old place for any opponent with title pretensions on those raucous occasions.

Almost a third of Merseyside derbies end in draws – 74 of 233 in total – and 34 of the 200 league meetings between the clubs have finished goalless, a record in English league football.

Sunday followed an established pattern down to the forgettable nature of the contest but at a time when Manchester City have raised the title-winning bar, each draw represents a damaging setback. Four such results in six Premier League outings reflect the inconsistency that has afflicted Liverpool in 2019.

From seven points clear of City on the morning of January 3rd to one point behind on March 3rd, Klopp’s side have stumbled in comparison with the champions’ relentless streak of nine wins in 10 league games. It is an exaggeration to say the pressure of leading the title race has got to a team unaccustomed to the summit, however.

Defensively, Liverpool have rediscovered the solidity and organisation that underpinned their challenge from the outset. A team consumed by nervous tension does not keep five consecutive clean sheets in all competitions.

Virgil van Dijk was again imperious against Everton and with Dejan Lovren possibly back for Sunday’s visit of Burnley, plus Joe Gomez expected to return after the next international break, Klopp’s options should be fully restored for the run-in.

A team cracking under pressure does not go 35 league games unbeaten at home either. Liverpool have dropped four points at Anfield this season, in draws against City and Leicester, and will host five of their remaining nine matches. Visits to Fulham, Southampton, Cardiff and Newcastle also compare favourably with a City schedule that includes trips to Selhurst Park and Old Trafford.

Henderson, to his credit, insisted there was only one way for Liverpool to disprove the pressure theory. “It’s no good talking about it, we have to respond on the pitch,” he said. “We have a lot of games left to do that so it is down to us really.”

The captain also maintained Klopp’s players will not be disheartened at having to play catch-up in a campaign that has delivered only one league defeat.

“I know how good City are,” he added. “They are a top team so you have to be on it every single week – and to be fair I think we have been. There have been one or two games where we have maybe dropped below the standards we have set but overall I think we’ve given everything and we’ll carry on giving everything until the end of the season. Fingers crossed it’s enough to win.

“It will not change our mindset. We take it game by game and we need to carry on doing that. There are nine games left, so plenty of football to play. Football is a lot to do with mentality. Obviously talent, which we’ve got in abundance, and we need to show our mentality in the next nine games – plus the Champions League – that we can achieve what we want to achieve. It is down to us on the pitch to show that.”

Liverpool’s defence and home form provide the foundations to sustain the title challenge plus hope that City’s slender lead can be overturned. Equally, the inconsistency of their attacking prowess, with Mohamed Salah encapsulating the contrast between the Watford and Everton performances, and an insufficient goal return from other positions are unavoidable concerns.

Klopp’s sparing recent use of Xherdan Shaqiri, so effective during a flawless December, invited the tactical questions that he evidently disliked at Goodison. There remains ample opportunity to silence the Everton taunts about winning sweet FA this season.

“We shouldn’t need added motivation to win the Premier League,” said Henderson on that particular subject. “I know how much this group of players want to win every game and that’s motivation enough: to do it for each other, to do it for the club and the city really. That’s enough for us.” – Guardian