Liverpool ease past an abysmal Stoke City at Anfield 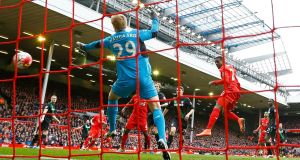 For Liverpool, the perfect Sunday stroll before the Europa League showdown with Borussia Dortmund. For Stoke City, a woeful afternoon of dissent and dismal defending that may have ruined their hopes of qualifying for next season’s competition. Jürgen Klopp enjoyed a carefree day and the biggest home win of his Liverpool reign.

Sheyi Ojo and the midfielder Kevin Stewart were handed full league debuts by the Liverpool manager, who also showed where his priorities lay before Thursday’s Europa League quarter-final against Dortmund by starting Kolo Touré and Martin Skrtel in central defence. Klopp’s Dortmund counterpart, Thomas Tuchel, revealed his hand too, making eight changes for the 2-2 draw against Schalke that helped Bayern Munich edge closer to the Bundesliga title while increasing pressure on himself for the second leg.

Europe and team changes did not distract Liverpool from leapfrogging Stoke in the table. The home side were ahead inside eight minutes courtesy of Moreno’s first goal in 65 games and a collective lapse in concentration among the Stoke defence. Phil Bardsley was penalised for a foul on James Milner, who played a quick free-kick inside to Moreno. No defender came near the Liverpool left-back as he controlled, took aim and beat Jakob Haugaard from 20 yards.

Moreno’s shot swerved viciously beyond the Danish goalkeeper into the centre of the Stoke goal but, in mitigation to Jack Butland’s replacement, his view was blocked by Ryan Shawcross and others backing off on the edge of the area.

The visitors were weak and passive throughout but in Xherdan Shaqiri, and his set-piece delivery in particular, they possessed one player who could unnerve Liverpool. The Switzerland international produced an audacious flick to release Bardsley down the right and, though Joe Allen intercepted on that occasion, and many others, Shaqiri created Stoke’s equaliser with an inviting free-kick from their next attack. Three Stoke players were kept onside by Touré as Shaqiri’s cross swung over and Bojan Krkic ghosted in unmarked to send a glancing header beyond Simon Mignolet.

Remarkably, it was Stoke’s first Premier League goal at Anfield and their first league goal here since 1983. It also confirmed that Liverpool’s weakness at defending set pieces had returned. Klopp’s team had gone two months without conceding from a set piece until Mats Hummels’ equaliser for Dortmund on Thursday. Now it is two in two games and but for Shawcross’s poor header wide and Mignolet’s fine save from Geoff Cameron, both from Shaqiri free-kicks, it would have been more.

Not that a Liverpool victory was ever in doubt from the moment Daniel Sturridge restored their lead. Credit for the second goal belonged to Ojo and it was a shame the 18-year-old failed to reappear for the second half due to injury. The young winger gave a glimpse of his potential by beating Shaqiri to the by-line with skill and pace before floating a perfect cross towards the back post. Unmarked and with Stoke’s defence awol once again, Sturridge could not miss with a close-range header.

Hughes and Klopp were embroiled in an argument after Shaqiri won a free-kick for leaping over Moreno’s challenge but the Stoke manager’s ire should have been reserved for his players. They displayed no fight and little threat, save from a Peter Crouch goal that was correctly disallowed for offside, and the contest was over four minutes after the restart. Origi, Ojo’s replacement, continued his fine week with an excellent header beyond Haugaard from Milner’s cross from the right. Yet again, no Stoke player was near the Liverpool goalscorer.

Roberto Firmino and Origi both went close to extending Liverpool’s advantage before the Belgium international delivered the fourth. The striker’s powerful cross from the left was intended for Sturridge’s run across the six-yard box. He just failed to connect, but the ball flew beyond the Stoke keeper and inside the far post.

The visitors’ dismal day was not yet complete. The hapless Erik Pieters was substituted moments after a show of dissent towards Hughes and was urged to cool down by Klopp of all people as he headed for the bench.