Leeds return to top of the Championship as West Brom draw 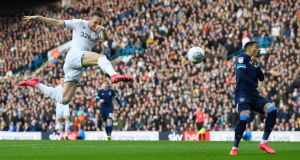 Leeds returned to the top of the Championship in style after beating Huddersfield 2-0 at Elland Road.

Luke Ayling’s stunning third-minute volley was added to by Patrick Bamford’s 13th goal of the season early in the second half to take United one point clear of West Brom, who drew 0-0 at Swansea.

Marcelo Bielsa’s side have now won their last five matches without conceding a goal, for the first time since 2009.

West Brom are six points above third-placed Fulham after the Cottagers could only draw 1-1 at Bristol City.

Fourth-placed Brentford returned to form by ending a five-match winless streak with a 5-0 demolition job on struggling Sheffield Wednesday at Griffin Park.

Josh Dasilva netted twice while Emiliano Marcondes, Tarique Fosu and Bryan Mbeumo also found the net, the latter’s 14th of the campaign, to leave Wednesday with one victory in 10 league matches.

QPR came from behind to provide further damage to Preston’s play-off hopes at Deepdale.

Daniel Johnson’s penalty gave North End a half-time lead, only for Grant Hall and Irishman Ryan Manning to strike either side of their team-mate Geoff Cameron seeing red, before Eberechi Eze sealed a 3-1 triumph.

A third consecutive loss for Preston saw seventh-placed Bristol City close to within one point.

Middlesbrough moved out of the bottom three at Charlton’s expense following a 1-0 win at the Valley.

Sam Clucas scored twice against his old side to allow Stoke to surge three points clear of the relegation zone following a 5-1 hammering of free-falling Hull.

Nick Powell broke the deadlock, Tyrese Campbell netted a penalty and Clucas struck inside 18 minutes before the former Tiger and Powell scored again after the break.

Leanardo Lopes netted a consolation for Hull, who are without a win in 11 league games and are only two points above the drop zone.

Cardiff hammered another nail in Barnsley’s coffin after securing a 2-0 victory at Oakwell.

Will Vaulks and Callum Paterson netted in the space of two second-half minutes to leave the Reds seven points from safety and City firmly in top-six contention.

A goalless draw at Wigan meant second-bottom Luton lost ground in their battle for survival, leaving them six points away from keeping their heads above water.

Ireland international Scott Hogan put the Blues in front in the sixth minute, registering his seventh goal in nine outings, but Matt Miazga, Yakou Meite and Pele completed the Royals’ turnaround in the second half.