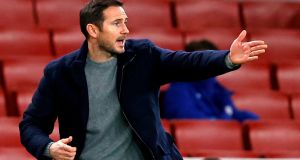 Frank Lampard: “The message is clear. The basics are to run and to sprint and the players have to do that on the pitch. The way we approached the Arsenal game in the first half wasn’t right.” Photograph: Adrian Dennis/AFP

Frank Lampard has questioned the mentality of his Chelsea players, wondering whether they have been adversely affected by being talked up as Premier League title contenders a few weeks ago, and he has demanded a return to the required levels of application against Aston Villa on Monday night.

The manager was fuming after the 3-1 St Stephen’s Day defeat at Arsenal when his team were 2-0 down at half-time.

He said that his players had lacked character during what he described as the worst 45 minutes of the season and he did not blame fatigue, rather the approach in which the basics were missing – primarily running and effort.

Lampard was always going to make changes for Villa’s visit due to the gruelling two-day turnaround from Arsenal but he suggested that some of the players would pay for their performances at the Emirates.

When Chelsea beat Leeds at home on December 5th, they were third in the table, two points off the top and were unbeaten in nine matches in the competition. They have since lost three out of four.

“There will be some changes and I knew that anyway,” Lampard said.

“I’m certainly not going to bang the drum about the [48 hour] turnaround after our performance against Arsenal. It’s not the important point. But to play two games in two days, we have to make changes anyway. Some of them will happen now because of how the game went and people will have to come in and inject the energy and the personality of our normal performances.

“The reason we went so many games unbeaten was because of that so we’ve come off that and we must come back on it quickly. Some of it is may be where we are at as a squad. People wanted to talk us up as title contenders . . . I never accepted that as the case because we are not there. That takes time to build and days like Arsenal are certainly ones that we have to learn a big lesson from.

“I’m not going to generalise that that’s the case because it’s not. But against Arsenal we did and football will punish you if you turn up and have that sort of lack of the basics in your game.”

Lampard’s tone was heavy on frustration because he knows how much talent he has in his squad. That said, he accepts that with some young players, a couple of whom are new to the league, there will be bumps in the road.

“When you lose a few games, things become a lot tougher and the only way out of it is to fight and work hard,” Lampard said.

“That’s what I will be instilling in the players. It’s a case of bringing back the good basics. You have to keep hitting them day in, day out. The defeats we had recently are because we dropped off. It’s my job to pick it back up.”