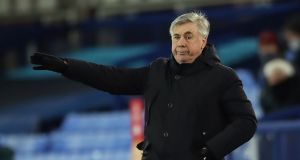 Carlo Ancelotti: “We’re not of the same level as some of the teams. We would like to be as soon as possible, and we’re working towards this, but if you ask me today, I would say we have to be honest about it.” Photograph: Nick Potts/PA

Carlo Ancelotti has played down talk of Everton challenging for the Premier League title this season, and says not even victory against Manchester City on Monday night will convince him that the Blues are in the hunt for a first league title since 1987.

Everton host Pep Guardiola’s side in the late kick-off looking for a fifth consecutive league victory following their 1-0 win at Sheffield United on St Stephen’s Day. Yet despite only Liverpool sitting above the second-placed Blues going into the game, Ancelotti insists his side’s sole focus is qualifying for Europe next season, not a push for the title.

“No,” he said when asked if Everton can challenge for the title.

“I think realistically, we have to say no. We are really pleased to be where we are, but I think that our target hasn’t changed. There’s a lot of competition in the Premier League and a lot of fantastic teams. We’re happy to be second, but our target is to play in Europe next season. That hasn’t changed.”

Victory on Monday would move Everton six points clear of City, and further strengthen their position inside the top four. But Ancelotti refused to even acknowledge the prospect of a title challenge even if they make it five straight league wins.

“It will be the same,” the Italian, who marked his first anniversary in charge on St Stephen’s Day, insisted.

Ancelotti remains without the likes of Richarlison and James Rodríguez on Monday night, with the former still recovering from concussion and the latter out with a calf injury.

However, the Everton manager revealed both are likely to be available for the visit of West Ham on New Year’s Day.

Meanwhile, Ancelotti also revealed that Allan is also nearing a return from a hamstring injury, while he has been “really surprised” about Lucas Digne’s recovery from an ankle injury which has kept him out for over a month, and he could now return by the end of January.