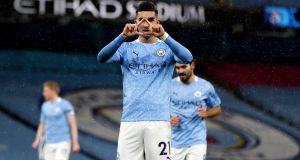 Manchester City breezed to a 2-0 home win over Newcastle United thanks to goals in each half from Ilkay Gundogan and Ferran Torres, a result that lifted them to fifth in the Premier League on Saturday.

On a rainy, cold night at the Etihad Stadium, Newcastle boss Steve Bruce started with a five-man backline but there was little his side could do to keep control of City’s array of attacking talent.

The home side went ahead in the 14th minute when Gundogan calmly fired home Raheem Sterling’s pass from close range after a typically patient and incisive build-up from Pep Guardiola’s side.

With City dominant in possession throughout, it took until the sixth minute of the second half for Newcastle to register a shot on target, but all it did was provoke the hosts even more, and four minutes later they went 2-0 up.

A concerted attack that ebbed and flowed across the field ended when Newcastle defender Federico Fernandez could only deflect a cross from Joao Cancelo into the path of Ferran Torres, who scored with a simple finish.

Torres, who spurned a couple of other decent chances on the night, was replaced by Sergio Aguero in the 77th minute. He forced a superb save from Newcastle keeper Karl Darlow minutes after coming on, but there was to be no further goals as City coasted to victory.

Sigurdsson scored 10 minutes from time to give Carlo Ancelotti’s team a fourth straight Premier League victory, moving them to within two points of Merseyside rivals and reigning champions Liverpool.

For the Blades, it was yet another defeat. Chris Wilder’s side have lost 13 of their 15 Premier League matches and are only the third club in top flight history to be without a win on St Stephen’s Day, after Burnley in 1889-90 and Bolton in 1902-03.

Aston Villa continued their fine run of form with a 3-0 victory over Crystal Palace despite playing with 10 men for more than half the match.

The hosts led through Bertrand Traore’s early opener and should have been further ahead when Tyrone Mings was shown two yellow cards in quick succession just before half-time.

Palace were unable to take advantage, though, failing to seriously test Emi Martinez in a second half that saw Kortney Hause and Anwar El Ghazi extend Villa’s lead.

The result lifted Villa into the Premier League’s top six — for a few hours at least — while Palace have now conceded 10 goals in two matches after last weekend’s hammering by Liverpool.

Southampton had two goals disallowed by VAR as they were held to a goalless draw at Fulham.

Shane Long and Theo Walcott both looked to have broken the deadlock for the visitors in the second half, only to have their efforts ruled out for offside on review as Saints slipped to eighth in the table.

The Cottagers played out their fourth consecutive draw and did so in the absence of their manager Scott Parker, who remains in self-isolation after a member of his household tested positive for coronavirus.

There were just three shots on target during the game, with possession also evenly shared between the sides.

Southampton had previously gone on a seven-match unbeaten run earlier in the season, during which they briefly topped the table, but the result sees them drop out of the European places.