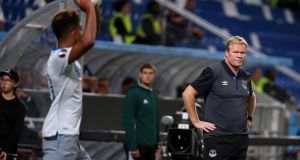 Everton coach Ronald Koeman watches as Atalanta defeat his team 3-0 at Mapei Stadium in Italy on Thursday: “I am worried about our aggression on the pitch and how we defend.” Photograph: Elisabetta Baracchi/AP

Ronald Koeman has held a crisis meeting with senior players at Everton after admitting he is worried by the weakness, doubts and loss of defensive organisation in his team.

Everton spent almost £150 million in the summer transfer market, yet “are not at the level of last season”, according to their manager, who was scathing in his condemnation of the Europa League defeat to Atalanta on Thursday. The woeful performance came after Koeman had demanded a reaction to the 3-0 defeat by Tottenham last Saturday, and the manner of the third consecutive loss prompted clear-the-air talks with the likes of Wayne Rooney and Phil Jagielka at Finch Farm on Friday.

Koeman, who took responsibility for the 3-0 loss at Atalanta, said: “I will have a meeting with most of the players, the key players. Not a young talent of 18 or 19 because it’s time for the experienced players to stand up. I wasn’t so worried after [the 2-0 loss at] Chelsea. It starts with the reaction in the second half against Tottenham. That 45 minutes and the first 45 of yesterday are enough reason to be worried.”

The failure to adequately replace Romelu Lukaku, whom Everton confront at Manchester United tomorrow, has cost Koeman’s team, with only two Premier League goals scored this season. But it is Everton’s defending, and the impact on the £30 million summer signing Michael Keane, that has most alarmed the Dutch coach.

“I am worried about our aggression on the pitch and how we defend,” he said. “I see a difference in how teams make it difficult for our strikers and how much space we give their strikers, how we let them turn, not following your man, not defending your man tight, not being aggressive.

“Michael Keane is normally our best centre-back in our ball possession. Maybe now he has doubts. And I can name more players who are struggling. That all together makes the team weak.”

Rooney returns to Old Trafford tomorrow for the first time since rejoining Everton and, despite being the only player to score for them in the Premier League this season, he is among those who Koeman has asked for a reaction. “I know we need to change some things but Sunday is not the time to change a lot,” the manager added. “Sunday is a game for men and experience. They need to show it.”

That gameplan would again exclude Jonjoe Kenny, despite Cuco Martina’s struggles at right-back. Kenny, 20, impressed in Everton’s under-23 Premier League 2 title-winning side last season and the England Under-20 World Cup-winning campaign in the summer.

“He is one of the talents,” Koeman added. “I know, because I hear a lot of times the name of Kenny. I mentioned one time that the under-23 competition is not the Premier League. The standard of performing is a training session by the first team. He is on my list, of course, but I think it’s not the moment to put Kenny in. But if I don’t get enough on Sunday and next week then maybe there comes an opportunity because he is a talent.

“But you can’t say that if someone is playing well for the under-23s he is ready. Tom Davies was an exception but now Tom Davies is struggling a little bit. Last season he came in the team and he was playing out of nothing. Now he is thinking, and he lost the spontaneity a little bit. If you saw the team yesterday [at Atalanta] there was no football that I like. They started and they went for it. We started afraid. That’s what we need to change.” – (Guardian service)