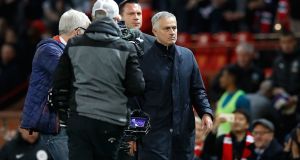 Jose Mourinho has been charged by the English Football Association over comments he made after Manchester United’s victory over Newcastle on October 6th.

The United manager spoke into a camera after his side came from behind to triumph 3-2 at Old Trafford.

The FA alleges Mourinho’s language was “insulting and/or abusive and/or improper” and the Portuguese has until Friday to respond to the charge.

Mourinho could potentially face a touchline ban if found guilty.

“It is alleged that his language at the end of the fixture, as captured by the broadcast footage, was abusive and/or insulting and/or improper. He has until 6pm on October 19, 2018 to respond to the charge.”

The match was played amid a tense atmosphere with the club having denied a report earlier in the day that Mourinho was going to be sacked that weekend regardless of the result.

United recovered from 2-0 down to complete a dramatic comeback with a 90th-minute goal from Alexis Sanchez. The victory ended a run of four games without a win.

Footage shows Mourinho saying something, apparently in Portuguese, while at one point looking into a camera, as he headed towards the tunnel after the final whistle.

He also made a gesture with his right hand while speaking, pointing with his little finger.

The 55-year-old, who claimed after the match that he was the subject of a media “manhunt”, said when asked about the gesture: “It is a finger. Smaller than the others, but it is a finger.”

1 The game they loved so well: How cricket united Hume, McGuinness and McCann
2 Brooks Koepka out to win Majors, not make friends
3 Brain as well as brawn on Sexton’s lockdown menu
4 Andy Farrell admits Ireland net may need to be spread wide in the autumn
5 Bryson DeChambeau’s driver snaps on seventh tee at US PGA
Real news has value SUBSCRIBE