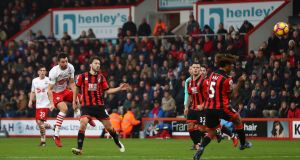 Claude Puel had promised his Southampton players a mini festive three-day break and it will feel all the sweeter after beating local their rivals Bournemouth in the 24th competitive meeting between the two sides.

Southampton found their goalscoring touch at just the right time, as Ryan Bertrand and a Jay Rodriguez double hoisted the Saints to seventh in the Premier League. Rodriguez’s second was a peach from outside the box, watched all the way by Eddie Howe, the Bournemouth manager who coached the striker while at Burnley.

Nobody is still quite too sure what moniker to slap on this fixture but it is a south coast derby to most. Only 28 miles separates Dean Court from St Mary’s and the Bournemouth chairman, Jeff Mostyn, described it as an “appetising lunch” against their neighbours.

Bournemouth, still confident after recording back-to-back victories on home turf, began sprightly and raced into an early lead inside six minutes. Southampton, meanwhile, struggled to dirty their pristine white third kit, making a Premier League debut of its own.

Puel made six changes from his side’s draw at Stoke City in midweek, with captain Jose Fonte dropping to the bench. One change was enforced, with Oriol Romeu suspended. Shortly after the teams were released, Puel spent 10 minutes in discussion with Fonte on the pitch, possibly reiterating his rotation policy that saw his captain play no part in their short-lived Europa League campaign.

A short corner routine allowed Jack Wilshere, again playing in a deeper midfield role, to curl a cross to the back post, where Nathan Ake eluded his marker, Pierre-Emile Hojbjerg, and sent a diving header past Fraser Forster. Wilshere’s first assist since joining Bournemouth on a season-long loan from Arsenal could not have come a better time.

Howe described Wilshere’s performance against Leicester City on Tuesday as his best in a Bournemouth shirt and he excelled again here, dictating proceedings and earmarking space for his team-mates.

There was a time when Southampton aided Bournemouth, sending them players on loan and partaking in pre-season friendlies to ease their overheads. “Can we have our money back?” sang the visiting supporters. But Bournemouth are no longer Southampton’s poor relations and Joshua King could have doubled Bournemouth’s lead but his shot was saved by the legs of Forster after the striker easily evaded the attentions of Maya Yoshida.

Southampton, unusually, looked suspect in defence. Going forward, they had joy down the left flank where Bertrand, who twice enjoyed loan spells at Bournemouth, frequently found space behind Adam Smith and Simon Francis. It was no surprise then when Southampton’s first meaningful attack, which resulted in their equaliser, was started and finished off by Bertrand. The Southampton left back easily turned Smith before charging past Francis towards the byline and drilling his effort in off the post, past the former Southampton goalkeeper Artur Boruc.

Bertrand established himself as Southampton’s main outlet and centred for Nathan Redmond, who totally fluffed his lines. Southampton were upstaged by Bournemouth’s sanguine first-half display and Puel changed things at the break.

Steven Davis, virtually ever-present for Southampton since joining the club in 2012, replaced Harrison Reed, who was exposed on his first league start of the season. The Northern Ireland international was quick to make an impact, playing a neat one-two with Sofiane Boufal before crossing low for Rodriguez to tap-in his first goal for four months. Boufal’s guile was eventually rewarded but the Moroccan continues to find his way. Boufal walked into the away dressing room with an oversized scarf upon arrival and was later booked for diving by the referee Mark Clattenburg.

After taking the lead, Southampton seized control and Bournemouth lost their rhythm. Howe’s side suddenly looked devoid of all energy and duly injected the pace of Jordon Ibe and Ryan Fraser, instrumental in Bournemouth’s win against Liverpool. Southampton had scored just 14 league goals ahead of this meeting – as many as bottom club Hull City – but found their goalscoring touch to claim victory and the bragging rights in the process. Redmond could have scored a third but by then Bournemouth, so impressive of late, appeared to have hit the ceiling.

But Rodriguez sealed the three points after 85 minutes and Southampton’s first away win in the league since September in the process. Rodriguez struck a sweet shot beyond Boruc after the ball bounced kindly at the feet of the striker, who excelled under Howe’s guidance at Turf Moor before earning his move to Southampton. “The south coast is ours, we are Southampton, the south coast is ours,” sang the Saints supporters as they exited through the Dean Court turnstiles.

1 Gordon D'Arcy: Ireland must conquer fear on a scary Halloween in Paris
2 Seán Moran: Will a silent, empty Hill help to loosen Dublin’s grip on Sam?
3 Cian Healy: ‘Realistically I got away with murder when I was younger’
4 Dave Heffernan delighted to have banished bad memory of his first cap
5 Robbie Henshaw likely to be the only Irish change for France finale
Real news has value SUBSCRIBE