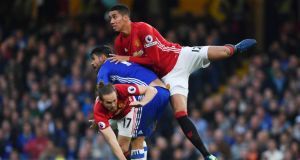 Eden Hazard has beaten his knee injury in time. The Belgium playmaker missed the Blues’ midweek win at Sunderland but is now back in full training. Former England defender John Terry remains sidelined with a gluteal strain, with no date yet pencilled in for his return.

George Friend could return to Middlesbrough’s starting line-up. Friend has missed Boro’s last five games since suffering a knee injury last month but having trained through the week, he is lined up to replace Fabio at left-back. Gaston Ramirez faces a late test on the foot injury.

Swansea are not thought to have any fresh fitness concerns, but Federico Fernandez and Ki Sung-Yueng look likely to remain absent as the Swans visit a team just one place above them in the Premier League.

Marko Arnautovic starts a three-game ban for Stoke. The midfielder was sent off in Wednesday’s goalless draw with Southampton and will not now return until the new year. Defensive duo Marc Muniesa and Erik Pieters should be fit after suffering knocks against the Saints.

Kasper Schmeichel could return for Leicester after missing the last six weeks with a fractured hand. The goalkeeper will be assessed but Danny Drinkwater looks likely to miss out with a knee injury. Danny Simpson will return from suspension.

Sunderland midfielder Jan Kirchhoff is out and could face a lengthy spell on the sidelines with a knee cartilage injury. The German is to see a specialist over a tear to his lateral meniscus and although there is as yet no timescale, he seems certain to be out for several weeks at the very least, joining defender Paddy McNair (knee), midfielders Lee Cattermole (hip) and Lynden Gooch (ankle) and striker Duncan Watmore (cruciate ligament) on the casualty list. Midfielder Didier Ndong is available after suspension.

Watford will be missing attacking midfielder Roberto Pereyra. Though the exact nature of the knee injury he sustained against Manchester City is not yet known, Pereyra will definitely miss out in the north-east, along with Northern Ireland international Craig Cathcart (groin). Valon Behrami will return from illness.

Craig Dawson could return for West Brom after missing Wednesday’s 3-1 win over Swansea through suspension. The defender is available but Jonny Evans could miss the game against his former club as he continues to battle a calf injury. Boaz Myhill (ankle) is struggling.

Chris Smalling is back in the Manchester United squad. The defender has been absent since October 23rd with a foot complaint and is available at the Hawthorns, as is Antonio Valencia after suspension. Luke Shaw (groin), Henrikh Mkhitaryan (ankle) and Eric Bailly (knee) are unavailable.

West Ham must decide whether to give Andy Carroll a second start in three days. The striker, recently back from another long-term injury lay-off, played 80 minutes on his first start since August in Wednesday’s 1-0 win over Burnley. Simone Zaza, Gokhan Tore, Reece Oxford, Sam Byram and Diafra Sakho remain on the sidelines.

Dieumerci Mbokani will return to contention for Hull. DR Congo international Mbokani boosts boss Mike Phelan’s options up front after serving a three-game ban and could go straight back into the starting line-up.

Bournemouth forward Callum Wilson will be available following a check for concussion. Midfielder Ryan Fraser will be assessed on an ankle problem, but otherwise manager Eddie Howe reported no fresh fitness concerns following the midweek win over Leicester.

Matt Targett has joined Charlie Austin in being an anticipated long-term injury absentee as Southampton prepare for the clash. Targett has undergone surgery on his injured hamstring and is expected to be sidelined for four months, while Austin faces a shoulder operation.

Manchester City are without midfielder Ilkay Gundogan after the German suffered cruciate ligament damage in midweek. Midfielder Fernandinho sits out the final match of his three-game ban while striker Sergio Aguero is also suspended for two more fixtures. Captain Vincent Kompany (knee) remains on the sidelines and midfielder Fabian Delph is not yet back to full match fitness after a groin operation.

Arsenal have no fresh injury concerns. Hamstring issues rule out Aaron Ramsey and Shkodran Mustafi, while Danny Welbeck and Per Mertesacker (both knee) are also out, as is Santi Cazorla (Achilles).

Mauricio Pochettino will make a late decision on Mousa Dembele’s fitness. Dembele missed Spurs’ win over Hull on Wednesday with a foot injury but could recover in time for the match at White Hart Lane. Erik Lamela, however, is out. The winger is still struggling with a hip problem while Vincent Jansen is also unavailable with an ankle injury.

Burnley hope to have winger Johann Berg Gudmundsson available again. The Iceland international has been missing since the end of November with a hamstring injury, but could come back into contention at White Hart Lane. Andre Gray could retain his place in the starting XI having returned to the team for the 1-0 defeat at West Ham on Wednesday night.

Everton will be without captain Phil Jagielka for Monday’s Merseyside derby. The defender was sent off late on in Tuesday’s 2-1 victory over Arsenal and must serve a one-match ban, but veteran midfielder Gareth Barry is available after sitting out the midweek clash.

Liverpool have decisions to make over Daniel Sturridge, Emre Can and Joel Matip. Sturridge is being considered for a cameo role as he continues to work his way back from a calf injury, while Can (knee) and Matip (ankle) are also well on the road to recovery. Goalkeeper Simon Mignolet will again start in place of the dropped Loris Karius.