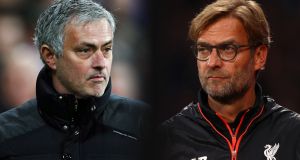 Jürgen Klopp has said Liverpool and Manchester United knew what style of football they were getting when appointing him and José Mourinho, and that a defensive approach would be tolerated at Anfield only if it delivered silverware.

Liverpool head to Old Trafford two points behind their rivals but minus the criticism that United’s performances under Mourinho have generated. Klopp has defended his opposite number’s pragmatism and admitted his Anfield reign would be viewed in a better light if, like the United manager, he had won the League Cup and Europa League in his first season. He believes leading clubs cannot complain about style when the philosophy of their managers is well established.

Asked whether managers who could afford the best players had a responsibility to entertain as well as win, Klopp replied: “All the clubs in England who signed a foreign manager knew what they would get. Liverpool needed somebody to start the development with a big thirst for being immediately successful, which is quite difficult.

“That didn’t happen but everyone can see that the way is positive at least. If you win the title next year then everyone will know it was a good signing.

“If you want the most fluent offensive football and to be successful then I think Pep Guardiola is a good choice. Antonio Conte’s doing a fantastic job. We couldn’t do any different here, not because we don’t want but because nobody would accept it. If Liverpool won the league then after the season no one would ask how it happened.

“With this way there are no guarantees we will get there, but we have to convince the people first with our style of football and being successful in the same way. We cannot play very defensive and not be successful – it just doesn’t work. We have so many fans all over the world who watch us. They have to get something if they don’t get silverware at the end of the season. We know the pressure here is to win.”

Since October’s goalless draw against Mourinho’s team, Liverpool have joined United in spending big on one player with the £75 million (€84 million) purchase of Virgil van Dijk. Their manager said Liverpool’s owners, Fenway Sports Group, will continue to recruit expensively this summer but only on the right player. Klopp said: “If the player is the right player this club will pay big money.”

Meanwhile, Mourinho has admitted he is yet to get the best out of Alexis Sánchez, with the manager blaming the forward’s disappointing form on joining Manchester United midway through the season.

Sánchez has scored once in eight appearances, from a penalty rebound against Huddersfield a month ago, and has often been underwhelming since signing from Arsenal in a swap deal involving Henrikh Mkhitaryan.

Mourinho said: “What is wrong is that he came at the worst moment – in the winter market. That’s why I don’t like the winter market very much. I think this was a chance that we didn’t want to lose and we made it.

“But we don’t believe a lot in the winter market. And next season it will be better for him. But, of course, he is learning how to play with us and we are learning how to get the best out of him.

“He is not afraid to take responsibilities, not afraid to try things. When he feels he’s not as dangerous as he likes to be, he drops back, he tries things, tries to come to areas where we build the play. When he makes mistakes he tries to compensate immediately with fantastic spirit, with a great transition to try to win back the ball. We are very happy.”

Mourinho conceded United, who have Marouane Fellaini available again after injury for Saturday’s game against Liverpool, have weaknesses but denied having to accommodate Sánchez is one.

“I don’t consider that a weakness, I consider that a huge potential to be developed,” he said. “I don’t tell you the weakness but if you ask the oracles, the oracles will tell you. Some of the guys with an opinion couldn’t resolve their own problems when they were managers, so they are giving opinions like they have solutions for everything.

“But they are in a position where they can give opinions about everything. Sometimes I read and listen. This week I was more focused on enjoying Champions League and Europa League and preparing my match than be focused on opinions.” This appeared to be a reference to Gary Neville and Graeme Souness, pundits who have criticised United’s style.