Harry Kane on the double as Spurs see off Everton 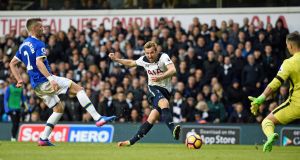 The clock is ticking down on White Hart Lane and Tottenham Hotspur appear determined to wring every last drop of satisfaction out of the old place. As things stand, the plan is to vacate their home since 1899 for the whole of next season, before they return to a rebuilt 61,000-seater stadium in 2018-19. All of which meant that the visit of Everton was advertised as the sixth-last league fixture at this ground.

It would go down as Tottenham’s ninth straight Premier League win on their own turf. Everton brought the best record in the division during the calendar year but they were swatted aside by a combination of Harry Kane’s ruthlessness in front of goal and Tottenham’s overall physicality.

Everton rallied late on and Romelu Lukaku snatched a goal that hinted at a comeback. But Dele Alli’s wonderful finish in stoppage time disabused them of that notion and the substitute Enner Valencia’s even later strike counted for nothing.

Kane had entered the game with three hat-tricks since the turn of the year and he might have had another one here. As it was, he scored twice and yet again, it was he who made the difference. The 23-year-old now has 20 goals in the league and 25 across all competitions.

It had been tight and tactical at the outset but Kane blew the doors off with the breakthrough goal. It came out of nothing but this is sort of thing that can happen when Kane is on the field. Everton did not feel any danger when he picked up possession 40 yards out and Idrissa Gueye allowed him to turn and move towards goal.

Gareth Barry was not worried, either, and he dropped off Kane. It was not as if the striker had the ability to fizz one in from 25 yards. Oh, wait. Kane took aim, the right-footed connection was pure and the shot exploded like a shell. Joel Robles was beaten to his right-hand post by the sheer power. Could Robles have done better? Perhaps he, too, was not expecting the shot.

It was the prompt for a ten-minute patch of furious Tottenham pressure, with the home team turning up the tempo and Kane striking fear into the Everton defence, with Ramiro Funes Mori coming to look particularly anxious.

Kane almost scored again with his team’s next move and it was one that was all about his strength and quick feet. He got the better of Leighton Baines and cut inside Barry before swapping passes with Christian Eriksen. Kane chose to twist again, jinking inside the slide challenge of Ashley Williams before unloading for goal. By then, however, he had Robles bearing down upon him. The goalkeeper blocked smartly.

It was all hands to the pump for Everton. Kane nearly reached a deflected cross from Kyle Walker; Eriksen dragged wide after being set through by Walker and Victor Wanyama guided a side-footed effort against the post from just inside the area. There was also the moment when Kane felt he was tripped by Williams as he chased a dangerous Eriksen free-kick inside the six-yard box. The referee, Michael Oliver, was unmoved, as he had been in the early running when Baines tangled with Walker inside the box.

Ronald Koeman had brought Barry back into the line-up at the expense of the young forward, Ademola Lookman, in a bid to be more secure and the manager pressed Ross Barkley high up in his formation, alongside Lukaku. Gueye and Tom Davies operated in tucked-in positions in between the lines.

Tottenham were conscious of the threat of Lukaku, who had begun the day as the joint-leading scorer in the Premier League, alongside Kane and Arsenal’s Alexis Sánchez. Toby Alderweireld and Jan Vertonghen know him well from the Belgium national team and they both made excellent tackles on him in the opening minutes while Eric Dier stretched into a saving slide challenge on Davies.

Tottenham won the right to play their football, with Mousa Dembélé and Wanyama coming to boss the middle of the pitch and the home team’s control was impressive. Koeman shuffled his pack when he sent on James McCarthy and Kevin Mirallas on 64 minutes and went to a 4-3-3 formation but, by then, his team were two goals down.

The second was a particularly horrible concession for the visitors. They had tried to play out from the back when Robles rolled the ball to Morgan Schneiderlin only to come unstuck. Dele Alli and Dembélé swarmed all over the defensive midfielder and when he tried to pop the ball off to Williams, he found only Alli, who touched through for Kane. One-on-one with Robles, there was an inevitability about the outcome. Kane took one touch to set himself and another to stroke low past the goalkeeper.

Like Kane, Lukaku only needs a sniff of goal and, in the blink of an eye, he brought his team back into contention to set up a finale that had scarcely been advertised. Vertonghen was outstanding – even finding the time for a couple of sorties into the Everton area – but his one error of the afternoon was costly. He got his feet into a mess as he back-pedalled and he slipped over, which allowed Lukaku to race through and ram a low shot past Hugo Lloris.

Kane might have made Tottenham more comfortable only to fluff a clipped finish when one-on-one with Robles – the goalkeeper saved well – and, at 2-1, Everton could dream of snatching a point.

Alli, however, made the points safe following a quick free-kick that was dinked into the area by the substitute, Harry Winks. Alli sprinted onto it and he touched a glorious flick with the outside of his boot into the far corner. Valencia had the last word, when he stole in unmarked to convert following another free-kick in stoppage time, amid general confusion. Tottenham, though, did not deserve to squander points.