Gus Poyet’s position at Sunderland not under immediate threat

Club board confident Uruguayan can keep side in the Premier League 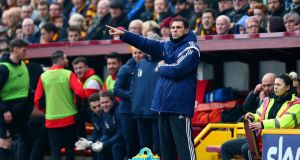 Gus Poyet’s position at Sunderland is under no immediate threat with the board confident the Uruguayan can ride out a current rough patch and keep the team in the Premier League this season.

Such optimism will be enhanced appreciably if Poyet’s players can recover from both last Tuesday’s home Premier League defeat to QPR and Sunday’s FA Cup reverse at Bradford City by beating West Bromwich Albion at the Stadium of Light on Saturday.

With Sunderland only two points clear of the relegation zone, three points against Tony Pulis’s team would offer some welcome insulation ahead of a potentially season-defining run featuring trips to Manchester United and Hull City before Aston Villa come to Wearside.

At a time when Poyet’s style and tactics are coming under increasing scrutiny the hope is that the often extremely defensive minded former Brighton manager will heed advice to adopt a slightly more attacking, creative approach. Poyet has recently, and erroneously, accused Sunderland fans of “living in the past” and craving “Kick and rush” football but his attempt to imbue the team with a possession-based passing game has been undermined by some overly deep defending and negative football.

Without such a loosening of the handbrake, the fear is that Jermain Defoe will not receive the service he requires to justify Sunderland’s hefty January investment in his finishing skills. A recent comment from John O’Shea, the captain, explaining that players find it difficult to “suddenly go from first gear to fifth gear” indicated that the current game plans may require some re-adjustment.

Fighting between Sunderland fans in the away end at Bradford emphasised a split among those supporters who want the manager replaced and others keen to retain the man who kept the team up last season while also leading them to the League Cup final.

Chants of “Gustavo Poyet – it’s always our fault” from those wearing red and white as Sunderland surrendered 2-0 to Phil Parkinson’s League One side did not go down well with Poyet who promptly and entirely falsely accused the media of misleading fans by misquoting him.

It was such a bad move that sceptics could suggest a man prone to blaming everyone but himself for setbacks is working on an exit strategy. Such theories will lose credence should Sunderland gain only their third home League win of the season on Saturday – but another stumble could see a 40,000 plus crowd turn on a manager who still has an awful lot to prove on Wearside. Guardian Service