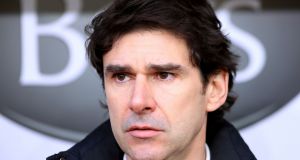 Aitor Karanka: in the frame for a move to Elland Road. Photograph: should read Tim Goode/PA Wire.

Garry Monk has resigned as manager of Leeds United, the English League Championship club have announced.

A statement issued by Leeds yesterday afternoon said the club was “shocked and disappointed” by Monk’s decision but that his resignation was “reluctantly accepted” by chairman Andrea Radrizzani.

The former Swansea manager was only in charge at Elland Road for one season, after replacing Steve Evans last summer, but guided Leeds to a seventh-place finish in the Championship, missing out on the playoffs by five points.

After such a promising campaign, he was expected to sign a contract extension to remain with Leeds but Monk has decided against it. His departure comes just a day after the controversial ownership of Massimo Cellino came to an end.

The former Middlesbrough manager Aitor Karanka is an early favourite for the Leeds post.

Victor Orta, former head of recruitment at the Riverside under Karanka, has been targeted for a technical director’s role at Elland Road and Monk has already been linked with a move in the opposite direction.

Crystal Palace, Watford and the recently relegated pair of Sunderland and Hull City are also on the look-out for new managers.