Newcastle manager accepts it ‘financially right’ to play on 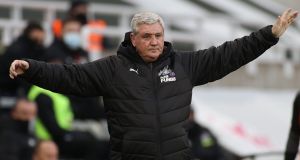 Steve Bruce believes it is “morally wrong” to continue playing elite-level football in the midst of the accelerating pandemic but fully understands the financial imperatives behind the Premier League’s desire to keep going.

Newcastle are just emerging from a Covid outbreak which affected at least 19 players and staff members. Although the majority suffered relatively mild symptoms, two of the backroom staff became, in Bruce’s words, “very poorly” and two first-teamers, Jamaal Lascelles and Allan Saint-Maximin, have been sidelined by the virus and its after-affects since late November.

Whereas Lascelles, Bruce’s captain, is in contention to return in the FA Cup at Arsenal on Saturday, Saint-Maximin is likely to remain sidelined for some weeks after returning to England following a period of convalescence in France.

“The speed which it hit our club within a week and ripped through everyone was scary,” said Bruce. “It’s difficult to contain and it leaves people sick. Jamaal has been given the go-ahead [to play again] by the doctors so it’s now just about he feels but Allan is going to take time. There’s so many symptoms and problems after the virus it’s been difficult.”

Bruce would not oppose any move to suspend the season. “I’ve seen how dangerous it is,” he said. “It was pretty scary stuff, I can tell you. We adhered to all the protocols but it just takes one person to cause mass infection.

“We are still suffering weeks and weeks after our outbreak. Arguably our best player [Saint-Maximin] has been laid low for six or seven weeks now and he’s been unable to do anything at all. Trying to get him back is a big challenge.

“Financially it is right [to keep going] and I know watching football gives a lot of people enjoyment, but for me morally it is wrong. I’ve seen people here get very, very sick and one member of staff was so ill he almost ended up in hospital. If that’s not serious enough [to stop playing] what will be? I’m sorry.”

Bruce was relieved to avoid the virus but remains shaken by recent events at St James’ Park. “I’m vulnerable aren’t I?” he said. “I was 60 last week. I’ve seen two of my staff, about the same age and how it affected them. It was pretty scary stuff. Everybody should be worried . . . Everybody is vulnerable. Footballers are as fit as they possibly can be but our star player has not been able to do anything for seven weeks so it proves the virus has no boundaries.”

Saint-Maximin has been spotted shopping with his family in a northeast supermarket in recent days and Bruce was asked whether the player might have breached quarantine rules on his return from France. “I think he has been in quarantine [for the full period],” he said. “He’s been in the country a while now.”