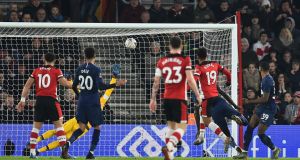 Spurs were heading to the fifth round after Son Heung-min put them ahead just before the hour mark, but substitute Boufal came off the bench to fire home in the 87th minute.

It means the tie will be settled by another game, to take place when both sides were due to be on their winter break from the Premier League.

Jose Mourinho, who celebrates his 57th birthday on Sunday, was three minutes away from a welcome win but the Saints were worthy of a draw after piling late pressure on.

Christian Eriksen was not involved for Spurs ahead of a proposed move to Inter Milan, although a potential replacement in Giovani Lo Celso shone, brilliantly setting up the goal.

After last weekend’s last-gasp loss at Newcastle was compounded by a late Arsenal leveller on Tuesday, Frank Lampard’s Blues avoided a frustrating week getting any worse at the Sky Bet Championship play-off hopefuls.

Hull looked bright at times in front of their first sell-out crowd since dropping out of the Premier League in 2017, but Chelsea ran out 2-1 victors as Michy Batshuayi’s deflected opener and a Tomori header proved enough despite Kamil Grosicki’s late goal from a free-kick.

City had not won any of their previous 10 FA Cup encounters with the Blues and were facing an uphill battle from the sixth minute, when Batshuayi’s strike went in off Ryan Tafazolli as Lampard’s side put a sloppy start behind them.

But Tomori, who spent the 2017-18 campaign on loan at the KCOM Stadium, ended that period of ascendancy for McCann’s side by scoring a close-range header, with Chelsea digging deep after substitute Grosicki’s deflected free-kick went in off Mateo Kovacic.

Slaven Bilic dumped his former club out of the FA Cup as West Brom sank woeful West Ham 1-0 at the London Stadium.

Bilic, sacked by the Hammers in 2017, came back to haunt them, with his Championship pace-setters running out deserved winners thanks to Conor Townsend’s early strike.

Gallingly for West Ham, this was pretty much their strongest available line-up while Bilic made eight changes to his, with the Croatian’s priority lying with the promotion race.

Not only that, but Albion also played the final 18 minutes with 10 men after Semi Ajayi was sent off for a second booking.

Among those drafted in by Bilic were experienced campaigners Charlie Austin, Chris Brunt and Gareth Barry, an FA Cup winner nine years ago with Manchester City.

Barry and Brunt may have a combined age of 73 but they were more mobile than anyone in the West Ham’s plodding midfield.

The rest of the Baggies side had pace, tempo, intensity and a clear game plan, all of which were lacking from the Premier League side.

Their goal arrived in the ninth minute after a carefree 40-yard run from Filip Krovinovic led to a mix-up between Issa Diop and Carlos Sanchez and saw the ball fall at the feet of Townsend.

The full-back still had plenty to do on the edge of the box, but he took a touch before pinging his shot across Darren Randolph into the far corner for his first Albion goal.

Second-half goals from Grant Hanley and Josip Drmic sent Norwich into the FA Cup fifth round for the first time in eight years with a 2-1 win at Burnley.

Erik Pieters gave Burnley hope with a 72nd minute drive but there was to be no grandstand finish from Sean Dyche’s men as the hangover from their midweek win at Manchester Uniited began to kick in.

Marcus Browne passed up an opportunity to dump Newcastle out of the FA Cup as League One outfit Oxford secured a deserved fourth-round replay with a 0-0 draw at St James’ Park.

The on-loan Middlesbrough midfielder shot straight at Karl Darlow after finding himself one-on-one with the keeper in front of a sell-out crowd of 52,221.

Karl Robinson’s men were far from overawed on an afternoon when the Magpies misfired horribly despite fielding a £81million frontline of Joelinton, Miguel Almiron and Allan Saint-Maximin — although the Brazilian did have two goals correctly ruled out for offside.

Newcastle will have another chance to reach the fifth round for the first time since 2006, but their failure to convert home advantage will now reduce their winter break.

Everton loanee Besic whipped home his first Blades goal on his 13th appearance, before Norwood wrapped up the fourth-round victory amid an insipid clash at The Den.

Aiden O’Brien scuffed a glorious early chance for Millwall and the hosts never recovered, with two clinical finishes sufficient to put Chris Wilder’s men in the hat for the fifth round draw.

An unusual set of circumstances saw Coventry welcome landlords Birmingham in an FA Cup fourth round tie which ended in a replay following a drab goalless draw.

The two clubs worked together to allocate both sets of fans an equal number of tickets, with a 21,193-strong crowd in attendance.

They watched a scrappy, even game which began to be edged by Coventry following the introduction of on-loan Aston Villa youngster Callum O’Hare and Sky Blues striker Max Biamou.

The pair combined to create the first real opportunity of the game after 77 minutes. O’Hare fed Biamou who attempted to bend in a shot from just inside the 18-yard box. Blues goalkeeper Lee Camp was alert, though, and able to make the save.

O’Hare should have put Coventry through at the death when he was presented with an open goal after Amadou Bakayoko looped a header across goal, but he did not connect — much to the delight of the Birmingham faithful.

Cardiff went ahead early on through Callum Paterson but Reading equalised in the eighth minute from Yakou Meite’s seventh goal of the season.

Robert Glatzel and skipper Sol Bamba missed good chances to settle it for Cardiff towards the end.

Portsmouth progressed to the fifth round of the FA Cup for the first time since 2010 by comprehensively beating Championship Barnsley 4-2.

Goals from Ben Close, John Marquis, Ronan Curtis and Christian Burgess helped the home side cause an upset at Fratton Park, despite replies from Cauley Woodrow and former Pompey forward Connor Chaplin.

Here is your handy guide to sport on television this week 17:01
Southampton stop Everton in their tracks at St Mary’s 17:11
Inspirational Burke points the way as Dublin clear opening hurdle 16:35
A changing of the seasons as Minella Indo lines up at Wexford 15:40
Lewis Hamilton makes history in Portugal with 92nd GP win 15:45

1 Seán O’Brien: Anger over my parents’ break-up never left me
2 2020 All-Ireland Senior Hurling Championship key dates
3 Here is your handy guide to sport on television this week
4 Hugo Keenan and Will Connors: The best of friends, the best of debuts
5 Ireland get the job done against Italy to keep alive Six Nations hopes
Real news has value SUBSCRIBE