Felix Magath’s side running out of time after home defeat 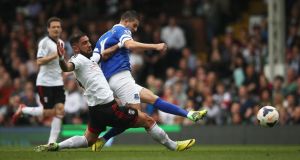 Fulham 1 Everton 3: Flawed finishing undermined a vibrant Fulham performance and increased the likelihood of their season coming to an unhappy end. Felix Magath’s side remain bottom of the Premier League table and are running out of matches with which to escape relegation. Everton, who were second best for long periods here, continue to dream of leapfrogging Arsenal in fourth place.

Fulham missed a slew of chances to take the lead before falling behind to an unlucky own goal by David Stockdale. Ashgan Dejagah struck a superb equaliser but, after more squandered chances by the home side, Kevin Mirallas and Steven Naismith secured victory for the visitors.

The England manager, Roy Hodgson, was applauded before kick-off as he made his way to the seat from where he would run the rule over Ross Barkley and Leighton Baines but his presence also served as a reminder of how quickly Fulham’s fortunes have fallen.

Four years ago Hodgson was leading the club into the most prestigious match in their history, the 2010 Europa League final, and now here was Felix Magath attempting to find a way for them to a cling to their Premier League status.

Fixtures in the top-flight since the start of the millennium, Fulham came into the game knowing that, if they were to beat Champions League-chasing Everton, they would need to produce the sort of performance that has eluded them all season.

After 31 matches of their campaign Fulham have long since aborted Plans A and B. Magath, their third manager of the season, was on to around Plan X.

He gave a first senior start to Moussa Dembélé, a 17-year-old French striker who, it was hoped, would provide the cutting edge that the seven other strikers used by the club this term had failed to deliver.

After surviving a series of Everton corners in the opening minutes, Fulham soon showed that Magath has given them vitality and method. They outmuscled the visitors, who seemed infected with a degree of complacency despite their own iffy record on the road this season.

As early as the third minute Fulham could have taken the lead, but Lewis Holtby slashed wide from 15 yards after collecting a cross from Jon Arne Riise. That was the first of several chances fluffed by the hosts in a first period in which they were the superior side.

Fulham were furious to be denied a penalty in the 13th minute when Sylvain Distin appeared to handle the ball as tried to beat Dembélé to a delightful Holtby cross from the left. The referee, Anthony Taylor, rejected the appeals so Fulham attempted to dispense justice themselves, but Brede Hangeland’s header from a corner dropped inches wide.

Kieran Richardson then missed a glorious chance after being teed up by Dembélé, the midfielder’s weak low shot from 10 yards allowing Tim Howard to save with his feet.

Everton only really threatened through Gerard Deulofeu, who pestered Richardson and Riise, in particular, with his wriggly runs down the left.

Deulofeu nearly finished off a sweeping Everton counter-attack in the 24th minute but his low drive was turned away by Stockdale.

With Fulham preventing Barkley, Leon Osman and Romelu Lukaku from exerting much influence, the flow of play soon switched back towards the Everton goal, where Howard had to backpedal to tip over a Holtby header from another dangerous Riise cross.

Holtby, a constant mischief-maker just behind the lone striker, unhinged the Everton defence again just before the break, dinking a sumptuous pass to the back post. Dembélé met it seven yards out but was unable to apply enough power on his header to trouble Howard. Fulham were soon made pay for their profligacy.

Barkley was doing little to enhance his chances of going to Brazil in the summer, nor indeed Everton’s chances of closing the gap to Arsenal in fourth place. So Roberto Martínez replaced him at half-time with Steven Naismith. The Scot was instrumental in opening the scoring, though it also took a cruel twist of luck to undo Fulham. After a 50th-minute corner by Baines was cleared to the edge of the area, Naismith volleyed the ball towards goal and wheeled away in jubilation when it deflected off William Kvist and a confounded Stockdale before landing in the net.

Everton sought to compound their hosts’ pain. Naismith sent Lukaku running free down the right and the Belgian forced a solid save from Stockdale. On the hour Baines burst into the opposing box but seemed torn between crossing and shooting and ultimately dabbed the ball just beyond the reach of Lukaku and wide of the post from 10 yards. Stockdale then had to show sharp reflexes to block a 12-yard shot from Lukaku.

In desperation Magath made a double substitution and one of the new arrivals, Dejagah, delivered renewed hope in spectacular style. The Iranian received the ball wide on the left and jiggled to within 20 yards of goal before walloping a thunderous shot into the net.

The Craven Cottage faithful pushed their team forward in search of a winning goal. The ever-inventive Holtby clipped a lovely pass to Cauley Woodrow and the young striker’s powerful effort was beaten away by Howard, who moments later made another smart stop to thwart Pajtim Kasami. Again Fulham were given cause to lament those misses, as within moments Aiden McGeady dissected the home defence with a pass to Mirallas, who finished unerringly from the edge of the box.

A neat close-range finish from Naismith three minutes from time left Fulham with a sinking feeling and Everton buoyant.

MCG could welcome 25,000 fans for Boxing Day Test 08:21
Gordon D’Arcy on a Halloween thriller; Will an empty Hill derail the Dubs? 07:51
Gordon D'Arcy: Ireland must conquer fear on a scary Halloween in Paris 07:55
Seán Moran: Will a silent, empty Hill help to loosen Dublin’s grip on Sam? 07:55
Dave Heffernan delighted to have banished bad memory of his first cap 06:00

1 Gordon D'Arcy: Ireland must conquer fear on a scary Halloween in Paris
2 Robbie Henshaw likely to be the only Irish change for France finale
3 Cian Healy: ‘Realistically I got away with murder when I was younger’
4 Cork City expected to approve €1 takeover by Preston owner
5 Seán Moran: Will a silent, empty Hill help to loosen Dublin’s grip on Sam?
Real news has value SUBSCRIBE