Everton strike late to pull away from relegation zone 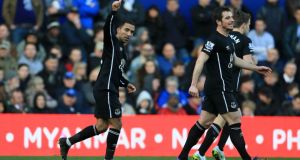 The chances of Everton being dragged into the relegation mire receded this afternoon thanks to a second-half winning goal by Aaron Lennon, who had earlier helped create a wonderful opening goal for Séamus Coleman. Queen Park Rangers had cancelled out Coleman’s goal with a 65th-minute strike from Eduardo Vargas and for a while the Londoners looked the more likely winners. But Lennon’s first goal since joining Everton on loan from Tottenham Hotspur in January gave victory to Roberto Martínez’s team.

Rangers have now lost six of seven matches under Chris Ramsey and nine of their last 10 in the league. They are going to need a dramatic reversal of fortunes in their eight remaining games if they are to rise above their current station of 19th in the table, four points below 17th-place Sunderland.

Everton’s defensive disintegration against Dynamo Kyiv on Thursday night had brought an embarrassing end to their attempt to offset sub-standard domestic performances with progress in the Europa League. That increased the pressure on Martínez to start rectifying the problems in the Premier League and put more distance between Everton and the bottom three. With Rangers needing a win to halt their downward momentum and renew hope that they could escape from the relegation zone, both sides viewed this match as an opportunity to be seized.

Ramsey made another grope for a successful formula for Rangers. He made four changes to the starting line-up that flopped so meekly at Crystal Palace last week, with the young full-back Darnell Furlong omitted from the squad, Adel Taarabt left on the bench and Shaun Wright-Phillips sent back to cold storage after being treated to a first top-flight outing in over two years last week. And Rangers began brightly, passing the ball with zip and pressing Everton with an intensity that prevented the visitors from finding fluency.

Rangers are not awash with creativity but Matt Phillips’ occasional dangerous crosses from the right and Joey Barton’s long balls towards Bobby Zamora were causing the visitors’ discomfort. John Stones and Phil Jagielka stood tall, however, and Tim Howard was not asked to make a difficult save in the first half - mind you, he should have been beaten in the 32nd minute when Zamora for once eluded his markers to meet a cross from Charlie Austin, but misdirected his header from six yards out.

Everton were already a goal up by then thanks to the best move of the first period and Coleman’s spectacular finish. In the 18th minute Lennon pierced the home defence with the sort of incisive pass from deep that Rangers were incapable of producing. The winger then skittered forward to receive the ball back from Arouna Koné and then feed Leon Osman, who slipped into the path of Coleman, arriving at speed down the right. The Irishman took a touch before whacking the ball into the net off the post from a difficult angle, 18 yards out.

Osman had gone close before that, flashing a shot just over from seven yards after a corner, and Joey Barton made brave blocks on ominous-looking drives from James McCarthy and Darron Gibson. Still, Everton were not playing well enough to banish QPR’s hopes of coming back. They were in the lead at half-time, but certainly not in control.

Rangers emerged with fresh belief in the second half and might have scored with in moments of the resumption. Junor Hoilett, who had barely featured in the first half, almost brought the home team level with a splendid curling shot over Tim Howard, but was aghast to see it bounce out off the crossbar. Rangers bundled it into the net on the rebound but only because Phillips had gained an advantage by being offside. No goal.

Rangers kept the pressure on and Everton began to creak. In the 65th minute the home side’s persistence was rewarded. As Everton tried in vain to clear the ball from their own box following a corner, a Sandro shot was blocked but eventually came to Vargas, who rammed the ball into the net from close range. The Chilean had just been introduced as a substitute for Hoillet, and his first goal for his club since October stoked belief that Rangers could go on to win.

Martínez was sufficiently alarmed by the course of events to make an immediate tactical switch, withdrawing Lukaku and introducing Ross Barkley, changing from a 4-4-2 to a 4-2-3-1.

The manager could claim vindication in the 77th minute, when a swift and tidy Everton move culminated with Coleman delivering a low cross into the box form the right. Nedum Onuoha prevented Barkley from reaching it but the ball broke to Lennon, who slotted into the corner of the net from seven yards. It was the loanee’s first goal for Everton, whose celebrations showed how precious it was.

There was still time for Everton to celebrate a let-off, as Taarabt fired against the crossbar moments after coming on as a late substitute.