Spanish goalkeeper tells MUTV: ‘We both want the best for the club and the team’ 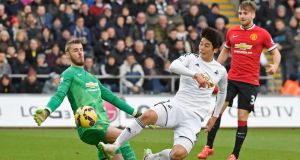 One report in Spain this week claimed De Gea had not spoken to the United boss in “a few months”.

But De Gea rejected that notion out of hand during an interview with MUTV on Friday.

“Everything that has been written in the press about us not getting on is a lie,” De Gea said.

“We both want the best for the club and the team, and the stories are complete lies.”

After signing seven players in his first year at the club, Van Gaal is expected to make more additions in the summer.

But for many United fans, the Dutchman’s priority should be extending De Gea’s contract, which expires at the end of next season.

The Spaniard has rescued United on countless occasions this season.

Few would have thought he was capable of such performances when at the start of his United career, when he made a series of howlers.

He thinks those days are firmly behind him, though.

“I think this is the best period of my career,” said De Gea, whose form has not gone unnoticed by Real Madrid.,

“I am playing the best football that I’ve ever played.

“I’m really enjoying it at the moment and I’m just trying to improve with every training session and every game that goes by, giving 100 per cent and concentrating to the maximum. That’s the way I want to continue.”

The 24-year-old hopes the team will return to winning ways against Sunderland at Old Trafford on Saturday.

“We were on a good run of results and winning some important games but, the other day at Swansea, we lost the game,” De Gea said.

“I don’t think we deserved to lose, but football can be like that.

“You go to tough away grounds and you lose points sometimes. We have to move on from that as now we face Sunderland and we need to concern ourselves with that test.”