Danny Rose lifts Tottenham out of mire with stunning winner 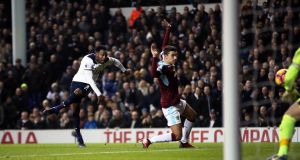 It was seconds after Raheem Sterling had put Manchester City 2-1 up against Arsenal in the 71st minute that the White Hart Lane scoreboard co-ordinator decided that it was time for a score flash from the Etihad stadium.

Tottenham Hotspur had needed a lift. They were the dominant team in this entertaining tussle but it was locked at 1-1 and they were struggling to prise Burnley apart; to create the moment for the knock-out blow. Perhaps, the news that their north London neighbours were down might spark them? The home crowd roared.

Shortly afterwards, whether by coincidence or not, the game’s outstanding player, Danny Rose, fashioned the breakthrough. It came with a sledgehammer swing of his left boot, after the substitute, Moussa Sissoko, had put him through on a quick break. Tom Heaton was beaten at his near post but it was no goalkeeping error. The power of the shot was too much.

Tottenham had most of the game, certainly in terms of shots on goal and the territorial advantage but Burnley were stubborn opponents, and they had their moments, too, not least the early chance for Andre Gray, which might have put a different complexion on the game.

The chance had come when Stephen Ward robbed Kyle Walker, surged forward and crossed and, not for the first time, Tottenham could be grateful for the reflexes of Hugo Lloris, who saved with his feet.

Burnley’s record on their travels remains dismal but they fashioned a sight for the sorest of eyes midway through the first half – an away goal; only their second of the season. Once again, the in-roads came up the Tottenham right, after Harry Winks had sold Walker short and Scott Arfield nipped in to win possession. His flick hit Winks and broke for George Boyd and, after his cross had ricocheted off Mousa Dembélé, Ashley Barnes was on hand to poke past Lloris.

From a Tottenham point of view, it was a mess and Mauricio Pochettino fumed on the touchline. His team had created the openings to have led and none had been clearer than the one that Dele Alli botched in the second minute. Harry Kane’s pass had set him through on Heaton’s goal, from an angle on the left, only for him to balloon the attempted curler high.

Kane and Christian Eriksen went close, while Alli found that the angle was against him after a Victor Wanyama headed flick. There had also been pain for Alli after Matthew Lowton caught him with a nasty lunge. Lowton’s brief was to stick tight to Alli.

Tottenham found a swift response to Barnes’s goal and it came from Alli. Wanyama rolled the ball wide to Walker and, from his low cross, Alli darted across some static Burnley defending to side foot low into the near corner.

Tottenham pressed onto the front foot throughout, with Walker and Rose contributing in an attacking sense. The closest that they came to another goal before the interval was when Alli played a lovely through ball for Kane. His shot came off the inside of Heaton’s leg and squirted to safety.

The soundtrack to the game was provided by the guttural noises from Pochettino and Sean Dyche in the technical areas, which threatened to summon previously unsighted wildlife to N17. Who knew what either manager was barking but the sense of urgency was palpable.

Dyche was beside himself at a number of the referee Kevin Friend’s decisions, none more so than on 54 minutes, when Eric Dier lunged into a penalty box challenge on Gray. Dier just about got a piece of the ball, together with other bits of the Burnley striker to emerge with the benefit of the doubt.

Tottenham continued to threaten without creating too much of clear-cut note. Eriksen headed at Heaton after good work from Rose; Alli curled narrowly wide of the far post and Eriksen was again denied by Heaton. Would it become one of those days for Tottenham? Rose, however, cut through the tension.

1 Ken Early: Handball ‘crisis’ a timely distraction from the grim bigger picture
2 The Offload: Springbok heavyweights heading for Pro14
3 All in the Game: No sympathy from Bruno Fernandes
4 Malachy Clerkin: Nothing compares to rich tapestry of sound offered up by GAA match
5 Tour de France: Every yellow jersey winner must feel guilty by some association
Real news has value SUBSCRIBE