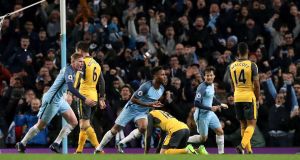 There was a point in this match, with Manchester City losing, when the ball came towards Pep Guardiola and, attempting to control it by the touchline, he slipped over in his brown, shiny shoes and ended up on his backside.

His team were struggling, the crowd was restless and City were in danger of a result that would have meant them going into Christmas outside of the Premier League’s top three for the first time since 2009 – or, to put it another way, just after Mark Hughes had been sacked.

The turnaround in the second half was considerable and, on the basis Guardiola has had a lot of criticism recently, it is only fair to report that his half-time switch was a prominent factor in sparking the recovery. Leroy Sané scored within two minutes of moving into a central attacking position before Raheem Sterling, switched back to his usual right-sided role, completed the comeback to leave Arsenal mulling over back-to-back league defeats for the first time since April 2014.

Arsenal subsequently find themselves nine points off Chelsea at the top, with City moving into second position, and Arsène Wenger must to be startled by their second-half deterioration bearing in mind the way they began this fixture.

Alexis Sánchez had teed up Theo Walcott for the opening goal after only four minutes and there were plenty of other occasions inside the first half when the visitors looked the more rounded side.

Instead, the fluency of City’s attacking in the second half, in particular the interchanging of positions between Kevin De Bruyne, David Silva and Sané, stretched Arsenal to a point whereby the final result was justified in favour of their opponents.

Silva’s exquisite pass sent Sané running clear to equalise with his first goal for the club and the winner came after 71 minutes when Sterling controlled De Bruyne’s beautifully measured pass, cut inside Nacho Monreal and caught out Petr Cech with a left-foot drive inside the near post.