Shamrock Rovers out for cup revenge against Dundalk

Despite EA Sports defeat, Rovers manager is adamant his side can triumph this weekend 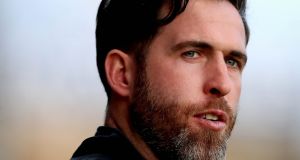 Stephen Bradley: “The last one was a close game until Aaron Bolger’s sending-off.” Photograph: Ryan Byrne/Inpho

Roberto Lopes looks set to start for Shamrock Rovers in Sunday’s FAI Cup semi-final (kick-off 4.45pm, live on RTÉ2) against Dundalk despite limping out of the league defeat in Richmond Park on Monday. The defender injured his ankle in the second half of the Inchicore game, but manager Stephen Bradley believes he will be available for his side’s latest encounter with the club that beat them in the EA Sports final just a couple of weeks ago.

Despite the 3-0 defeat that day, Bradley, who rates Trevor Clarke as a “real doubt” due to the ankle injury that kept him out this week, is adamant that his side can build on their two earlier league wins and beat Stephen Kenny’s side this weekend.

“The last one was a close game until Aaron Bolger’s sending-off. I think anyone who saw it would agree and I think we’ve shown this year that when we go head to head with top teams, we can more than match them.”

Bolger is available again for this game and Bradley says he would have no reservations about starting the teenager again despite the sense among neutrals that the player’s inexperience might have played a part in the incidents that led to his dismissal. The manager says, however, that no decision has been taken yet on Sunday’s line-up.

Kenny must wait until close to kick-off to assess the fitness of John Mountney, Steven Kinsella and Dane Massey, with the left-back having been risked on Monday in Turner’s Cross only to limp out of the game early on.

Shane Grimes came on for Massey then and could start this weekend, as he did in the League Cup final. Niclas Vemmelund seems certain to return after having served a suspension.

“The three-nil was a great result for us but it’s not going to have much of a bearing on the result on Sunday other than in the sense we know what we can do if we play well,” says goalkeeper Dundalk Gary Rogers.

Rovers, he says, have the potential to pose a major attacking threat but he believes Dundalk were well-prepared for them defensively last time and that their recent form suggests they can keep them at bay again.

“Gary Shaw has been leading the line really well for them and then you have the likes of Ronan Finn and Brandon Miele. Graham Burke has been injured but Trevor Clarke has been playing well and he’s got a good strike on him, too, so we’ll look at all of their strengths and weaknesses and look at the best way to get a result. We know what to expect and we have to prepare properly to deal with that.

“I thought we did well when we played them a couple of weeks ago but then I’ve been happy with the way we’ve been playing well as a back five for a while now. We’ve kept a good few clean sheets and that’s always a good indication of how you’re doing.”

A year on from his two call-ups to Martin O’Neill’s Ireland squads, Rogers says he has no complaints about being overlooked these days and no great expectation of a return any time soon.

“It was great to get that opportunity but you have to respect the fact that [Rob] Elliot, [Darren] Randolph and [Keiren] Westwood are playing at a very good level and so they are going to be the three keepers.

“My priority is to finish the season on a high, and going to the Aviva for the cup final would be the best way to do that now.”