Conor Sammon relieved to be back on the scoresheet 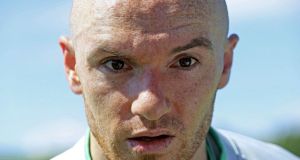 The on-loan striker scored his first goal for Ipswich Town against his former Wigan Athletic, having last scored when playing for Derby County in December.

Sammon’s 63rd minute effort turned out to be the winner after Luke Hyam gave Ipswich the lead and Martyn Waghorn got one back for Wigan when he deflected James McClean’s shot into the net eight minutes from time.

“It was great to get my first Ipswich goal and extra special to share it with the travelling fans,” said Sammon, who spurned the fashionable option of not celebrating a goal against a former club.

“It’s such a long trip when it could be easy to stay home and watch it on the TV. So all the lads wanted to thank the supporters and I think that was clear to see with the celebrations at the end.

“We worked extremely hard from the first minute right until the very end. Wigan are a very good side, as they showed last season, but I thought we proved we were the better team and deserved the win. Obviously it was a bit nervy towards the end after they pulled a goal back, but we did well to hold out and take the three points.”

Ipswich manager Mick McCarthy was delighted to see Sammon get off the mark and especially pleased the Dubliner enjoyed the celebration. “I think that’s rubbish, that,” he said of muted celebrations. “I think it’s the biggest load of nonsense ever. Are you ever going to go back to that club? My club is Ipswich, I have had a few, but if we win, I will be giving it large let me tell you.”

Sammon is one of eight forwards named in the provisional 37-man Ireland squad this morning ahead of next month’s Euro 2016 qualifiers againts Gibraltar and Germany.