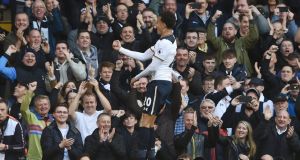 The Premier League title has begun to feel like a pipe dream for Tottenham Hotspur, given the majestic form of Chelsea, but they continue to suggest that they will finish as the best of the rest.

This was a 13th consecutive win at White Hart Lane in all competitions, with 10 of them having come in the league and if it was underpinned by angst in the second half, as Southampton mounted a stirring comeback, they still got the job done.

The visitors had threatened during the first half and when James Ward-Prowse got them back into it on 52 minutes, they pressed on to the front foot. But it had to be said that for all their latent menace they did not have a moment when they advertised the equaliser. Mauricio Pochettino’s Tottenham substitutions were designed to see the game out and they did just that.

The home team missed their top scorer, Harry Kane, who has started his latest spell of rehabilitation for ankle ligament damage and, in his stead, Son Heung-min did little to distinguish himself. Tottenham got home thanks to Christian Eriksen’s vicious drive and Dele Alli’s penalty, the award of which felt a little soft. The attacking midfielder did not care. He had won it and he converted it. Alli now has 17 goals in all competitions this season.

It is the time of the season when it feels commonplace to hear complaints about fixture congestion. Not from Southampton. Remarkably, this was only their third game since the win at Sunderland on 11 February. Claude Puel had spoken beforehand of the difficulty of maintaining the levels of concentration and his team were behind in the early running.

Eriksen was allowed to collect the ball from Mousa Dembele and dart on a diagonal towards the edge of the Southampton penalty area, with Ryan Bertrand trailing in his wake. Nobody in a red-and-white shirt stepped out in time to make a challenge and Eriksen fizzed a low shot into the bottom corner for his 12th goal of the season.

Tottenham’s second followed a series of scuffs by Southampton defenders and a failure to clear properly and, when Steven Davis stamped in to try to take charge of the situation, Alli nipped in on his blindside. For Alli, it was all about getting to the ball first and then feeling the contact. In Kane’s absence, Alli picked himself up to drill home low from the spot.

Southampton had their moments when the scoreline stood at 1-0 and there were winces on 28 minutes, in particular, when Dusan Tadic blazed over from the edge of the six-yard box, after Nathan Redmond had volleyed back Cedric Soares’s deep cross. It was a horrible miss. Oriol Romeu also fizzed a pot-shot just past the far post while Manolo Gabbiadini fired into the side-netting, after a smart one-two with Tadic.

The visitors were weakened on the half-hour, and it was deflating to see Gabbiadini in pain on the ground, holding his groin and making the signal to the bench that something had torn. The striker’s run of six goals in four Southampton appearances was brought to a shuddering halt.

Tottenham had other flickers in the first half, among them Alli’s spin and shot, which went straight at Fraser Forster, and Toby Alderweireld’s header from an Eriksen corner that drew an excellent save out of the goalkeeper. Southampton felt that they should have had a penalty of their own at the end of the first period, after Ben Davies swung and connected with Tadic’s shin. Before the impact, though, Davies looked to have got a piece of the ball.

There were some outstanding performances in midfield, not least from Tottenham’s former Saint, Victor Wanyama, whose power in the one-on-one challenges is something to behold. On the other side, Romeu was a snap-shot in tenacity and polished technique.

Southampton knew that they had to score the first goal in the second-half and they did. Alderweireld will lament his botched attempt to deal with Bertrand’s cross from the left and, with Jan Vertonghen wrong-footed behind him, Ward-Prowse took a touch to control with his chest before squeezing his shot past Hugo Lloris. Game on.

Gabbiadini’s replacement, Shane Long, has been clocked as the fastest forward in the division and, as he looked to play off the shoulder of Tottenham’s last defender, the home team could not relax. The crowd became a little nervous and it said everything about how the second-half had gone from Tottenham’s point of view that, in the 75th minute, Pochettino took off Son and brought on an extra midfielder in Harry Winks.

But the closest that Southampton came to parity was when the substitute, Sofiane Boufal, fizzed well wide, having cut inside. The Tottenham substitute, Vincent Janssen, who provided a focal point late on, almost added a third for his team only for Forster to touch his fierce shot over the crossbar.