Charisma will take Van Gaal only so far 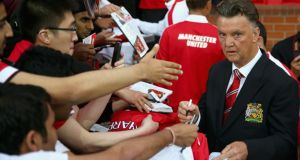 Manchester United manager Louis Van Gaal has inherited a bit of a mess but he is the man to sort it out. As well as coaxing the best out of what he’s got, he is also committed to blooding young players. Photograph: Clive Brunskill/Getty Images

Saturday. 12.45pm. Old Trafford will be graced by a true sporting great. Nope, not Maroune Fellaini, but Rory McIlroy, the world’s best golfer and a United fan.

McIlroy is the Manchester United of golf. Attacking, exciting, full of verve and vigour – everything United like to think themselves to be.

Yet it wouldn’t be a surprise if the Claret Jug and the Wanamaker Trophy are the only silverware the Old Trafford faithful get to see this season.

The 2013/14 season was a nadir for the modern United. The retirement of Alex Ferguson left the club with a big decision to make. It was a decision they got fantastically wrong.

Under David Moyes United’s air of invincibility was stripped away. Records tumbled, but not in a good way. Old Trafford went from being a fortress to just another ground, and the likes of Newcastle, Spurs and Everton found themselves leaving M16 with three points for the first time in a generation.

But now there are green shoots of life returning to Old Trafford and the old swagger is starting to return, courtesy of one man.

Louis Van Gaal was an instantly popular appointment among United fans. Not only is his CV impressive but he’s the charismatic, no-nonsense antithesis of Moyes.

This enthusiasm has continued thanks to an impressive pre-season which saw wins over Roma, Inter Milan, Real Madrid and Liverpool, as Van Gaal set his new charges out in the 5-3-2 formation which got the Netherlands to the semis in Brazil.

The 5-3-2 formation looks a good one, the perfect answer to the conundrum of fitting Wayne Rooney, Robin van Persie and Juan Mata – United’s three best outfield players – into the same side.

However, it is largely being used to attempt to mask the major holes in the squad present for a number of years.

Towards the end of his tenure Ferguson dragged relatively average United squads to the league title. The club are relying on Van Gaal making a similar impact and need all of his nous and ego to take them back into the Champions League.

Until the recent signing of Ander Herrera, United hadn’t signed a central midfielder since Anderson in 2007 – unless you count last summer’s panic buying of Fellaini.

Herrera is a fine player, but he’s without a world class partner. With Michael Carrick’s powers on the wane, United’s only other midfield options are Darren Fletcher, who can’t be expected to make the impact he once did after recovering from serious illness, and Tom Cleverley. Indeed, nearly 10 years since his departure, the club are yet to truly replace Roy Keane.

In Jonny Evans, Chris Smalling and Phil Jones United have three defenders full of potential but all in need of a senior pro beside them to really flourish.

Add to this a frustrating crop of wingers from the erratic Nani to the predictable Antonio Valencia and the clearly incompetent Ashley Young and you have a squad in need of serious surgery.

There’s a simple solution to all this – spend. United’s chief executive Ed Woodward, who has become a figure of ridicule among supporters, has made all the right noises, suggesting the club are willing and able to break transfer records to bolster van Gaal’s squad. But the key to the war chest is still missing.

United’s pursuit of Arturo Vidal and Mats Hummels, the type of players needed for a serious title challenge, looks to be going the same way as Thiago Alacantra last summer and Wesley Sneijder before that.

Van Gaal made it clear before the summer tour he wanted to assess the squad before bringing in new faces, but with just over two weeks until the window shuts and on the eve of the new season the only recruits have been Herrera and Luke Shaw – both of them Moyes targets which the new manager signed off on.

Every chairman knows United are desperate to sign and fees will be inflated. But Woodward and the club aren’t in a position to be picky over price tags if they want to challenge this season.

Everybody else has strengthened. No longer constrained by stadium repayments Arsenal’s marquee signing of Alexis Sanchez is a big boy purchase, and follows January’s arrival of Mesut Ozil.

Liverpool have lost the league’s best player but spent the money quickly and sensibly and have done a much better job than United in 2009 when they replaced Cristiano Ronaldo with Valencia, Michael Owen and Gabriel Obertan.

Even Chelsea, watched like hawks by Uefa to ensure they comply with Financial Fair Play regulations, have managed to improve their starting side. They’ve brought in Diego Costa, Cesc Fabregas and Filipe Luis while still making €2.5 million in player sales.

FFP has meant Manchester City could only spend€62 million this summer but the champions have used it to bring in Eliaquim Mangala and finally give Vincent Kompany a decent centre half partner.

There is still time for United to bring in players, and with Van Gaal ready to show five squad members the door it is likely to happen, but it’s worrying their rivals seem able to get their business done quicker.

At least their absence from European should help United bounce back into the Champions League at the first time of asking.United are a global behemoth; they can survive a season out of the Champions League. The recent 107,000 attendance in Ann Arbour for the pre-season friendly against Madrid is a testament to the size of the club. Nobody else in England comes close.

However, a second season outside of the top four is not an option. No Champions League football again would stretch to United’s new record breaking kit deal with Adidas, struck on the condition the club are back amongst Europe’s elite within two years.

Ultimately, a return to the top four would constitute a successful season for Louis Van Gaal and Manchester United.

Bit of a mess

And if United don’t go big in the transfer market then maybe youth is the answer. Amidst last season’s misery the emergence of Adnan Januzaj, who has been given Ryan Giggs’ number eleven shirt, was a rare highlight.

James Wilson is the next academy graduate ready to make the step up and could replace Javier Hernandez as the fourth striker, while Tyler Blackett impressed as part of the back three on tour.

These players may not be the answer to all of Van Gaal’s problems but they are young, arrogant, fearless and exciting - everything United should strive to be once more. Heck, it’s worked for Rory McIlroy.