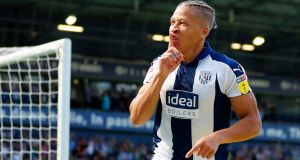 Dwight Gayle’s double allowed West Brom to emerge victorious from a clash of two relegated clubs at the Hawthorns.

The Baggies and Stoke are both hoping for instant returns from the Championship, but on the evidence of the first six games, the former look the most likely and won this 2-1.

On-loan striker Gayle scored in the 16th and 59th minutes, while Benik Afobe missed a penalty for Stoke, with Erik Pieters adding a consolation just as time was up. Gary Rowett’s men have one win from six.

Aston Villa had a chastening afternoon as they lost 4-1 at Sheffield United.

Villa have been active in the transfer market in the wake of their financial worries being resolved, but were humbled in South Yorkshire.

Jack O’Connell set the tone six minutes in and Mark Duffy added a deflected second. Oliver Norwood made it three before the break and it was four thanks to Billy Sharp (49).

Derby left it late but continued their fine start under Frank Lampard as they won 2-1 at Hull.

Summer signing Martyn Waghorn opened his account from the spot 23 minutes in, but Todd Kane levelled (53). However, Derby dug deep and won it through Florian Jozefzoon with two minutes left.

Lewis Macleod got them going (45) and although in-form Matty Cash replied, Ollie Watkins won it.

Adam Reach and Lucas Joao scored as Sheffield Wednesday won 2-1 at Reading, Liam Moore replying for the hosts who remain without a win.

Bolton came from 2-0 down to draw 2-2 at Preston. Callum Robinson (11) and Alan Browne (16) got North End off to a flier but Sammy Amoebi and Pawel Olkowski levelled before the break. Preston’s Ben Pearson was sent off late on.