Alisson not getting a free pass after blunder 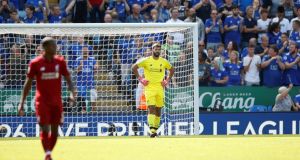 Liverpool boss Jurgen Klopp said Alisson Becker’s blunder was inevitable but must not be repeated after the Reds maintained their 100 per cent record.

The goalkeeper’s gaffe put the Premier League leaders’ perfect start in jeopardy but they hung on to claim a 2-1 win at Leicester on Saturday.

Alisson gifted the Foxes a way back when he was robbed by Kelechi Iheanacho as he dithered on Virgil van Dijk’s back-pass and Rachid Ghezzal scored.

Sadio Mane and Roberto Firmino had put Liverpool 2-0 up before the break and Klopp hopes Alisson, who conceded for the first time, has got the mistake out of his system.

He said: “It was always clear it would happen. It needs to happen so that it will not happen again. Football is a game where a lot of mistakes happen but that one was a big one.

“We still want to use him but maybe Joe Gomez could have cleared the situation, Van Dijk for sure could have, and if Alisson cleared the ball with his first touch everything is fine.

“It’s best game to do it because we won the game, we’ve ticked that box. We know we are still adapting to each other — don’t use him in the wrong moment. He’s an option for us, not the solution.

“No goalkeeper in the world should dribble in that situation but he did it but it’s all okay.”

Mane opened the scoring after 10 minutes as Liverpool dominated early before snuffing out Leicester’s revival when Firmino headed in James Milner’s corner a minute before half-time.

The fourth straight win means it is Liverpool’s best start to a season since 1990-91, when they were defending champions, and they have won their opening four Premier League matches for the first time.

Klopp added: “Result-wise it could not have been better, performance-wise we can improve. The start showed how good we can be. It’s still early in the season and we are not 100 per cent stable.

“We are the deserved winners and that’s the only thing I’m interested in.”

Leicester paid for a slow start, where Firmino and Mo Salah missed fine chances for Liverpool, and the Foxes had too much to do once they began a second-half fightback.

Wes Morgan went close before Ghezzal’s goal and despite the Foxes applying pressure they failed to find an equaliser.

Boss Claude Puel said: “We finished the game with a lot of frustration. It is a good game because we have had the possibility of taking a point or even to win, perhaps, if we had not conceded the second goal just before half-time.

“I am happy about our reaction in the second half, with good tempo and fantastic pressing. We had a lot of chances to come back. But it’s encouraging for the future.

“We showed a lot of quality, good togetherness and had a lot of chances. We have to learn the details because that was the difference today. So frustration, yes, but I hope we can come back after the international break with the same desire.”