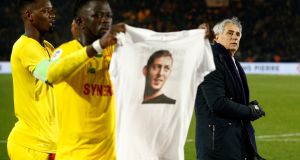 Cardiff run the risk of being docked Premier League points if they do not honour the £15 million (€17 million) fee owed to Nantes for the transfer of Emiliano Sala, according to sports law expert Gianpaolo Monteneri.

Sala’s flight from Nantes to Cardiff fell into the English Channel on January 21st, just two days after the Argentinian striker’s transfer to the Premier League club was announced.

Cardiff received a formal letter from Nantes on Tuesday asking for the first of three yearly instalments of the Sala transfer fee, understood to be £5.27 million, to be paid within 10 days.

Cardiff chairman Mehmet Dalman, in an interview with French newspaper L’Equipe, was reported as saying that he did not think Cardiff “said it was not going to pay”.

But it is understood that Cardiff want to clarify “all the facts” surrounding the accident before honouring the contract.

However, Zurich-based lawyer Monteneri, who was head of Fifa’s players’ status department from 1997-2005 before setting up his own firm specialising in international sports law, has warned that Cardiff could be punished for not paying the transfer fee under the terms of the contract.

“If certain deadlines, which are mentioned in the transfer contract, are not met then these may trigger consequences for the club in question,” Monteneri told Press Association Sport.

“This can be from an admonishment right up to a withdrawal of league points.

“It is a very tricky situation as we are talking about a human tragedy and an important amount of money.

“It is a human case on one side, and on the other side for Nantes, a financial case and compensation that they are potentially not receiving.

“They have also lost a key player and for them it is a sporting effect as well that needs to be considered.”

Cardiff have expressed “surprise” that Nantes made the transfer demand while attempts were under way in the English Channel to recover the bodies of Sala and pilot David Ibbotson.

One body has been recovered from the wreckage of the aircraft, which is on the seabed 34km off the coast of Guernsey.

But the two clubs now appear locked in a legal dispute, one which Monteneri says could end in the corridors of Fifa or even the Court of Arbitration for Sport.

CAS is an independent institution, based in the Swiss city of Lausanne, involved in resolving legal disputes in the world of sport.

“There are, in my opinion, two possible solutions,” Monteneri said.

“The first one is that the parties have established to go to Fifa and, in such a case, the matter is submitted to the players’ status committee in the first instance, with the possibility of an appeal to CAS.

“But it also possible that the parties have decided to skip Fifa and go direct to the Court of Arbitration for Sport.

“For this kind matter of matter there is an obligation to go to football or sports-related bodies.

“It is also an advantage for the parties involved to go to a body that is specialised in football matters because they have a better understanding of the case and are far faster [in reaching decisions].

“I think it it very likely that Nantes will proceed to the end to have compensation in what is a unique case, and that the two clubs will sit on a table to find a suitable solution for all of them.”

On Wednesday night, Dalman confirmed Nantes’ request in a newspaper interview, saying: “The only thing I can say because it is a sensitive subject is that I confirm that what you are saying is true.

“And to be honest, I do not want to say anything more in the state.

“The first thing is that the body has not been recovered yet. We must show respect to the family.

“There is the process of recovering the plane. It’s too early for us to comment.

“When we think it’s the right time to do it [we will comment]. I do not think the Cardiff club said it was not going to pay.”

It has been reported that Cardiff had up to £16 million insurance on Sala (28) yet may still incur excess when it comes to covering his 3½-year contract and the lost revenue that was anticipated for their club-record signing.

Ligue 1 club Nantes have not made any comment on the matter.

Bordeaux are also entitled to a cut of the fee, thought to be 50 per cent, as Sala was on their books from 2012 to 2015 before joining Nantes.

The plane carrying Sala and Ibbotson disappeared en route to Cardiff after the footballer returned to Nantes to say goodbye to his former team-mates.

Show me the medals: Ireland drops one place in Tokyo Olympic predictions 14:15
Dana White: Conor McGregor to fight Dustin Poirier again in July 13:12
Simon Zebo is heading back to Munster next season 13:52
Seedorf wants to stop players covering mouths while talking 11:44
Liverpool leaning on Salah more than ever right now 11:20

4 Show me the medals: Ireland drops one place in Tokyo Olympic predictions