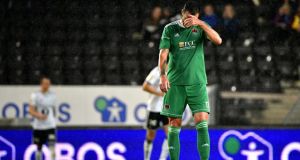 The impossible job proved to be just that as Cork City’s mistakes once again saw them undone in Europe.

Trailing 2-0 from the first leg, the League of Ireland champions had to attack their hosts and there were half-chances in the opening exchanges - but both Jimmy Keohane and Karl Sheppard had weak efforts which André Hansen in the Rosenborg goal was equal to.

Kieran Sadlier had a few moments on the left flank as Cork took the game to Rosenborg. Sheppard - playing as the central striker - benefited from good play from Steven Beattie and Garry Buckley to find possession on the right of the box. He whipped the ball across but nobody had taken a gamble and a Rosenborg throw-in was the only result.

Rosenborg right-back Vegar Hedenstad had a quickly taken free kick which went wide in the 25th minute and just moments later he would be involved in the opening goal. When a free kick by Søderlund wasn’t fully cleared, Hedenstad retrieved possession and fed Mike Jensen, who crossed from the right. Goalkeeper Mark McNulty went for the ball but could only flap and it fell perfectly for Bosnian defender Besim Serbecic, who fired a shot through the gang of bodies and into the net.

Sheppard did have a shot in response but Hansen saved and Rosenborg doubled their lead 10 minutes before half-time. Unsurprisingly, the tireless Trondsen was at the heart of a it with a surging run which carried him into the penalty area before squaring for Søderlund to finish from point-blank range.

Trondsen could have made it three before half-time but Cork survived until the break, with McNamee introduced instead of Morrissey for the second half. However, the flow of the game couldn’t be reversed and Rosenborg left-back Birger Meling, excellent over both legs, almost set up Levi for what would have been his third goal of the tie but a bobbling shot wasn’t awkward for McNulty.

The third goal had an inevitability about it and it came on the hour mark. Naturally, Trondsen was integral to it as yet another forward run yielded dividends, dummying to allowing Søderlund an easy pass into his path, with an emphatic finish beyond McNulty. At the stage, the small band of travelling supporters might have been fearing the worst, but there was at least the consolation that there would be no more goals.

One at the other end would have softened the blow further, and with 20 minutes remaining it nearly came. When Sadlier’s shot was half-blocked down, Buckley had time to pick his spot and was unlucky that the ball came back off the crossbar. It fell to Keohane but a wonderful save from Hansen denied him.

Rosenborg had other chances, but they didn’t need them and they now move on to next week’s play-offs.