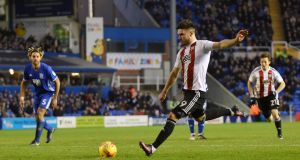 With a move to the Premier League looking almost certain to be completed this month, Scott Hogan might be still undecided about his international ambitions but a couple of his Brentford team mates are clear that their aim is to catch the eye of Martin O’Neill as the west London club bids to make the play-offs over the coming months.

Hogan was in the stands for Saturday’s comfortable cup defeat of non-league Eastleigh with the striker, whose 14 goals in 25 league games this season has attracted plenty of interest, especially from West Ham, reportedly suffering from a muscle injury.

Amid reported interest from Watford and others, West Ham have so far bid around € 9 million for the 24 year-old although Brentford have put a price of closer to € 17 million on him and the top flight outfit are likely to have to go most of the way towards meeting that valuation if they want to complete the deal.

“He’s a good player,” says Slaven Bilic. “I watched him a few times. He is very sharp, quick - a good finisher, doing it in Championship. He’s young and a good prospect.”

With the expected move looming large and, perhaps, a successful run in the Premier League opening up the possibility of an England call-up, Hogan has been in no hurry to commit himself to Ireland despite Martin O’Neill making absolutely no secret of his interest.

His attitude contrasts starkly with that of Dublin born midfielder Alan Judge who was devastated last year when a serious knee injury ended his hopes of making it into the squad for the European Championships. The 28 year-old is expected to resume training over the coming weeks and should be back playing by the end of February although he now seems unlikely to complete a big transfer of his own until the summer.

Two other members of Brentford’s Irish contingent are happy to progress their international ambitions at the club, however. Cork born defender John Egan has been one of the team’s most consistently impressive performers since arriving last summer from Gillingham while local lad Tom Field, capped at under-16 level by Ireland but passed over since, has been making quite an impact in recent weeks and scored his first two senior club goals in Saturday’s cup victory.

“It’s different football,” says Egan of his first half season at Championship level; “It’s a step up. You’re playing with better players and you are playing against better players so you’re really tested but it’s great to be going to really big grounds and playing in front of big crowds and the ultimate aim is the Premier League. If we can keep improving I don’t see any reason why we can’t get a few wins and push on up the table.

Egan played on the right of a back three on Saturday and looked quietly impressive as he carried the ball out of defence and helped get the team moving forward. “When you play a back three you kind of get that chance to step forward into midfield a bit more and obviously we were comfortable here so it was good to try to get forward and try to get into the mix.

“So far so good,” he says of his time at Griffin Park. “I’ve played every game and that was pretty much the aim when I came. My form has been good I think and so it’s just a question of being consistent now and keeping it going throughout the rest of the season.”

He has, he says, no doubt about Hogan’s potential to make an impact for Ireland: “He’s a fanastic player,” he says, “a great goalscorer; quick, technically very good...if he keeps his head down and stays fit the sky’s the limit.”

But he has ambitions in that department too, of course, he confirms. “That’s a massive goal of mine, it would be a massive ambition of any Irish footballer I’m sure but I need to keep playing well here and if I can keep doing well on the field here then you never know what might happen.”

Field, meanwhile, admits to having been deeply disappointed by the lack of contact from successive underage Ireland managers since he made his two under-16 appearances against Estonia in late 2012 but catching the eye of O’Neill or under-21 boss Noel King remains a target says the 19 year-old, a lifelong Brentford supporter and former season ticket holder, who has broken into the team in recent weeks after an injury to England under-19 international, Rico Henry.

“Getting my first goals was great,” he says. “After I’d dug my face out of the turf I looked up and sort of couldn’t believe it. I’m a Brentford fan and every kid dreams of scoring in front of your home crowd. When it came to celebrating it I just didn’t know what to do.

“But I’m exactly where I want to be at the moment. I want to establish myself in the championship and when Richard comes back it will be a battle but it will be an opportunity to become a better full back.

“And yeah, definitely; any international football I’d be happy with. My family’s background (his two maternal grandparents) is Irish. But there has been no contact since those caps at under-16 level.

“I hope there might be an opportunity but I’ve just got to keep doing what I’m doing, keep improving because I know I can get better. I’m not playing at 100 per cent yet. I’m probably a couple seasons away (from being a contender for senior caps) but the hope is to get some maturity from playing in the Championship and push on from there.”