‘Bless him. He is a massive part in the history of Liverpool Football Club’ 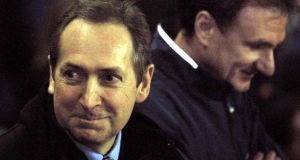 Gérard Houllier was my mate. It was a strange relationship in some respects but it was a great one that got better the longer it lasted. There was a bit of man-love about it. We appreciated each other and we loved each other. He was very family orientated. He cared about everybody and everything. I am absolutely devastated.

My four boys are here with me now and they’ve all said how nice he was to them. Whenever he came back to Liverpool and saw them at a game he would grab their faces and kiss them on both cheeks. That’s something he always did. He would do it to me too.

It was such a big change when Gérard arrived because we’d had the Boot Room, then Kenny as player-manager [Dalglish], then Graeme Souness, who knew the history, and then Roy [Evans]. We’d kept that link in. Then we had the ill-fated joint relationship which never gave Roy or Gérard any great hope of working.

For Gérard to get the job was a big call and a culture change. Discipline was not high on the agenda before Gérard and he didn’t want to force his will on Roy when he came in. He wanted everything structured and timed but that didn’t happen until he became the sole manager.

It was a massive culture shock for players who were used to it being relaxed, fun and games, and five-a-sides. The team wasn’t good enough for five-a-sides, it needed working on and Gérard’s expertise was exactly what was required. I was literally caught with my pants down when the call came to join as his assistant.

I had been training with some of the ex-players for the Masters Series and was getting changed when Peter Robinson (Liverpool’s former chief executive) rang. We’d just lost to Tottenham in the League Cup the night before and I’d been on Radio City going on about the partnership not working and the frostiness on the touchline coming across on to the pitch.

It was a bit of a rant, if I’m being honest, and I thought Peter was ringing to give me a rollicking but he asked me to come for a meeting. He said Roy was resigning and the press were all at Anfield so not to come there and to go to the chairman’s house immediately. I went straight there in my tracksuit and the whole board of directors were there. Apparently they had been talking about needing someone who could get a grip on the players and stand up to them and Tom Saunders had said the person you are talking about is Phil Thompson.

My first question was what does Gérard Houllier think? I didn’t want to come in if he didn’t sanction it but he had, and he knew everything that I’d done for the club in the past. I don’t know why but it just came together. We were two opposites that created a positive. I was a brash, aggressive coach and a disciplinarian. So was Gérard, but he needed someone to do that side while he worked the players his way. And it worked.

Six months later we were in a hotel for an away game at Derby and out of the blue he said to me: “I’m so happy to work with you. I just want you to know that.” I often think about what happened at half-time against Leeds (when he was taken to hospital with a suspected heart attack). Many years later I told Gérard he was lucky that day and he couldn’t believe I’d said that, but it happened at half-time when the streets around Anfield were empty.

Forty-five minutes later a full ground would have been emptying, the streets would have been full, and the ambulance would not have been able to get him to hospital in time. Every minute counted that day.

The next day, a Sunday, we were flying to Kyiv. We had decided to go a day early because it was a 4½-hour trip ahead of a Tuesday game. I was devastated on that flight. Usually we’d sit together on a row of three seats with two bags of wine gums in the seat between us and we would munch the lot. But he was not there and I was sat on my own. Then it dawned on me I had to give a team talk. I’m not short of a few words but Gérard always gave great team talks. I always thought of them like a commentator covering a horse race because he would build up momentum gradually, telling the players how good they are and never the opposition, then finish in a crescendo of positives.

How could I do that? I spoke to the doctor and gave the players an update on the operation and after giving my team talk, which I like to think went well, I flipped over to the last page on the flip-chart where I’d written something like “Do it for the boss” or “Think about the boss because he’s thinking of you”.

We had worked so hard in the 2000-01 season but after we beat Arsenal in the FA Cup final Gérard said: “Nobody celebrates.” The players were allowed one glass of champagne but no more because we had the Uefa Cup final on the Wednesday.

That was such a big moment. It was our first European trophy in 17 years and a whole generation of Liverpool fans could now relate to what their dads and granddads had told them about going to Europe. We didn’t get back to the hotel until about 2am and again Gérard said, “No celebrating” because we needed to qualify for the Champions League at Charlton on the Saturday. I’ve since heard a few lads did have a drink, and I won’t mention any names like Didi Hamann, but it was nothing daft.

Charlton battered us in the first half and Sander Westerveld had to make four or five worldies to keep us in the game but once we got the weariness out of our legs the turnaround was incredible and we won 4-0. On the final whistle we just hugged each other shouting: “We’ve done it, we’ve done it!” We hadn’t wanted to tempt fate by allowing booze on the coach before the game but we stopped at the nearest Sainsbury’s afterwards and the coach driver loaded up with beer and champagne.

There was so much I thought the coach was tilting over. That was a lovely journey home.

There was a real togetherness and that was down to Gérard. He always insisted that everyone came to the finals in Cardiff, including the younger players who had played in the early rounds. There was 26 in the travelling squad for the League Cup final against Birmingham and the same for the FA Cup. He had such a great nature. It would have been the 20th anniversary of his heart operation next year and we were talking about getting together for a meal in Paris or Liverpool to mark the occasion.

I told him that October 13th just gone was his 19th birthday. Bless him. He is a massive part in the history of Liverpool Football Club. He leaves a great legacy. - Guardian