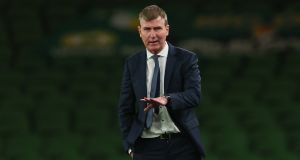 Stephen Kenny: “It (the media attention) was a big surprise (but) it’s not a concern for me.” Photograph: Inpho

Stephen Kenny says he will take what he gets when Ireland’s World Cup fixture list is finalised by Fifa on Tuesday. And the Republic of Ireland manager suggests that getting back to games will be welcome after what he described as the “surprise” of having to having to deal with the fallout from the video he showed his players in advance of the recent friendly defeat by England, something he describes as having been a “non-story”.

The manager maintains that the squad will be stronger when it gathers for the World Cup games and that he will have all of his backroom staff on board, including Alan Kelly, who he said will continue to be a part of the set up.

Kenny insisted will be targeting qualification from a group that includes current European champions Portugal when the first of the games come around in late March, with his Ireland side “not there to make up the numbers”. Just one team will qualify automatically with the second placed side going to through to play-offs in which 12 countries will compete for the final three qualification places from Europe.

“We’ll approach the games positively, particularly in March and try to have a good window,” said the Ireland manager. “We haven’t qualified for a World Cup since 2002, nearly 20 years, and it has to be our ambition to try and qualify, that’s why we are here. It’s difficult with 13 teams from Europe but that’s our intention, to try and achieve that.”

Fifa are due to confirm the group fixtures before 6pm on Tuesday and Kenny admits to being keen to see the order in which the games will be played, although he is less certain how much difference it will make.

“In the past you could negotiate the fixtures, you can’t do that now, you have to accept the way the fixtures are drawn. That’s the way it is. Whatever way they come, we will address it and look forward to playing the games.”

Asked if he would like to get games against Luxembourg and Azerbaijan in early so as, ideally, to get points on the board, Kenny observed that: “You think you would like that, but you never know. Sometimes you’re best getting the best team first but you don’t know when it’s best to play a team.

As with the order of the games, Kenny suggested that there might be pros and cons to Ireland having been drawn in a five rather than a six team group but he said that even if there are three games in March - with one of them being a friendly - that would ease the pressure on the players at least a little bit.

It was the friendly game played in the last window, of course, that gave rise to the Wembley video controversy and the subsequent investigation by his employers into what exactly had happened. Kenny, though, is adamant that the incident has not in any way undermined him within the squad, with his backroom staff or the association.

“The video was a non-story,” he says. “It was a football video, basically of goals scored by the players in training, goals scored in Wembley the night before, also with some goals from previous Ireland matches against England, with some historical references and that was it. A lot was made of it but it was very light on content.

“It (the media attention) was a big surprise (but) it’s not a concern for me,” he continued. “I don’t think the leaks were . . . definitely not intentionally from the dressing room. I think there may be people behind the scenes or elsewhere who want to cause problems for the team or don’t have the best interests of the team (at heart) but certainly I have no problem with anyone in the dressing room.”

At the time there were clear suggestions in a number of reports that Kelly had expressed reservations about the video and/or made a report to the FAI but Kenny said this was not true.

“He definitely did not,” he said of the goalkeeping coach who issued a statement himself denying the suggestion that he might have been responsible for any leak to the media. “I’m not discussing any member of staff in the press conference,” said Kenny, “but that’s doing a disservice to Alan.

“It was a distraction and we put it behind us. It was a distraction, we all could have done without it, but we are firmly focused on the football now. Some great games in the World Cup qualifiers, and that’s what we are looking forward to.”