Berahino back in the good books, Villa lose again, Watford and Bournemouth draw 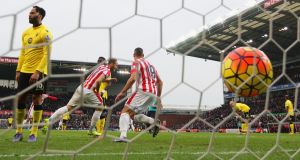 Marko Arnautovic struck twice in a 2-1 win for Stoke as they piled the misery on Aston Villa.

Villa boss Remi Garde publicly questioned the commitment of some of his players in light of the performance against Liverpool last time out, with the 6-0 defeat the club’s worst home loss in 81 years.

Perhaps stung by those words Garde’s team, with just one change — Alan Hutton in for Micah Richards — looked much better especially during the first half at the Britannia Stadium.

However their soft underbelly returned at the start of the second half and it cost them as Arnautovic hit two goals, the first from the penalty spot, putting Stoke comfortably in front with 56 minutes on the clock.

It would have been easy for Villa to crumble, and if a Philipp Wollscheid header just after the hour had gone in they might have, but they dug in and showed some rare fight and pulled a goal back through Leandro Bacuna with 11 minutes remaining.

An equaliser never looked likely though and the defeat, Villa’s 10th away from home in the league this season, leaves them eight points adrift of safety at the bottom of the table.

Odion Ighalo endured a frustrating afternoon as Watford’s top scorer missed a number of chances in a goalless draw with Bournemouth.

Ighalo has found the net 15 times already this season but the Nigerian was unable to break the deadlock at Vicarage Road, with the best chance of the game seeing him head over from six yards in the second half.

The stalemate does little for either side’s league ambitions as Watford remain ninth in the table while Bournemouth stay 15th, five points above the relegation zone.

England’s assistant manager Ray Lewington was watching on from the stands at Vicarage Road, perhaps to check on Troy Deeney ahead of Euro 2016, but the Hornets captain, like his strike partner, struggled for his usual potency on his 250th appearance for the club.

Deeney and Ighalo have scored 22 of Watford’s 29 league goals so far season but if Quique Sanchez Flores’ side have any ambitions of carrying their excellent campaign into the European spots, they will need both to regain form fast.

In their last 18 combined appearances, the duo now have only four goals between them.

In Saturday’s late kick-off, Saido Berahino took another step towards redemption by playing a starring role in West Brom’s 3-2 victory over Crystal Palace.

A day after publicly apologising for his threat to go on strike as he tried to force a move away from the club, the 22-year-old capped a fine individual and team performance in the first half with a stunning goal.

Berahino finished off a flowing move to make it 3-0 after only 31 minutes, following on from goals by Craig Gardner and Craig Dawson. But Albion ended the match hanging on after a brace from Connor Wickham, the second a stunning volley in the 80th minute.

The three points were marred by the loss of Chris Brunt, who was carried off just before half-time after landing awkwardly in an innocuous-looking tussle with Wilfried Zaha.

The home fans had shown their appreciation for the 31-year-old before and during the game a week after he was hit in the face by a coin thrown by a Baggies fan, and it was a sad way for his evening to finish.