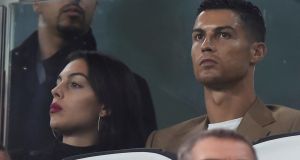 Ronaldo and his girlfriend Georgina Rodriguez sit in the stand at the Allianz Stadium in Turin during the Champions League game between Juventus and Young Boys on Tuesday night. Photograph: Massimo Pinca/Reuters

Cristiano Ronaldo has firmly denied allegations of rape made against him.

The Juventus forward is being sued by a woman in the United States who claims he raped her in the penthouse suite of a Las Vegas hotel in 2009.

Writing on Twitter, Ronaldo said: “I firmly deny the accusations being issued against me. Rape is an abominable crime that goes against everything that I am and believe in.

“Keen as I may be to clear my name, I refuse to feed the media spectacle created by people seeking to promote themselves at my expense.

“My clear conscious [\sic] will thereby allow me to await with tranquillity the results of any and all investigations.”

The Nevada woman alleges the former Manchester United forward dispatched a team of “fixers” to obstruct the criminal investigation and trick her into keeping quiet for $375,000.

Las Vegas police confirmed to the Associated Press on Monday that they have reopened a sexual assault case from 2009 brought by the woman named in the lawsuit.

The lawsuit also accuses Ronaldo or those working for him of battery, intentional infliction of emotional distress, coercion and fraud, abuse of a vulnerable person, racketeering and civil conspiracy, defamation, abuse of process, breach of contract, and negligence for allowing details of the confidential settlement to leak out.

It asks for general damages, special damages, punitive damages and special relief, each in excess of $50,000, along with interest, attorney fees and court costs.

1 The Offload: Ireland are stuck in no man’s land
2 Nicky English: Galway and Waterford face battles with fatigue in All-Ireland semis
3 Every kind of wind imaginable was against Tipperary football - and they came through
4 Ken Early: Roles have reversed for Guardiola and Mourinho
5 Former Ireland assistant manager Maurice Setters has died aged 83
Real news has value SUBSCRIBE
Crossword Get access to over 6,000 interactive crosswords