‘It raises questions that we have to answer, we have a lot to answer for’, says Gunners boss 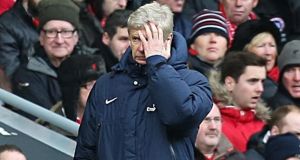 Arsenal manager Arsene Wenger on the touchline during the 5-1 defeat to Liverpool at Anfield. Photograph: Peter Byrne/PA Wire

Arsenal manager Arsene Wenger says his side’s 5-1 demolition at the hands of Liverpool “raises questions” heading into the business end of the Premier League season.

Braces from Martin Skrtel and Raheem Sterling, plus another strike from Daniel Sturridge, saw the Reds to a famous win over the side leading the way in the standings at the start of the day. A number of errors contributed to the Gunners’ miserable afternoon on Merseyside, and the experienced Frenchman admitted to being concerned by what he saw from his players, but admitted he had to accept some of the blame as well.

“Our overall performance was poor, our defensive stability was poor and we needed to be better focused,” the Arsenal manager said. “Congratulations to Liverpool, they were the best team. Only the Arsenal fans were superb today (the away section in the Anfield Road end kept up a commendable level of vocal support throughout), that was all.”

He added: “The performance was just not good enough, and I include myself in that performance,” he said. “It raises questions that we have to answer, we have a lot to answer for, though maybe it is best if I don’t talk too much about what went wrong here ad we just go home and put things right on the pitch on Wednesday.

“We didn’t look sharp against Liverpool but it’s how we respond that matters. We have a chance to show we can make an improvement in the next game and it is important we do not lose all our confidence and self-belief.”

Opposite number Brendan Rodgers was understandably thrilled by a performance that saw the Anfield side close to within five points of the Gunners, although he refused to accept the result put his troops back in the title hunt.

“It was an incredible performance,” he said. “It’s not the first time we’ve been outstanding at home, but everything about us today was incredible. Everything was outstanding. We’ve been getting better and better. We’ve got a lot of young players, developing well. But for us it’s just about improving.”

Sturridge, who scored Liverpool’s fourth goal with just 20 minutes on the clock, added: “We went out and did what the manager told us to do. The first 20 minutes we were unbelievable. The boys all over the field, every player, has done fantastic over the last couple of games, but we won’t get too excited.”

Rodgers was loathed to letting his side get talked up as title contenders, however, even though he admitted he thought his side could have scored more.

“We just want to finish as high as we possibly can,” the Liverpool manager said. “There are three teams ahead of us, and you only have to look at the depth of the squads we are up against to see how hard it is going to be. Just look at the strength of the Arsenal bench today, compared to our own.

“We intend to challenge for the title in time, but we are still getting to that position at the moment. We put down another marker today. It was an outstanding performance, but we have had a few of those this season.”

Chelsea have a free hit from here but may not get a better shot at it 08:49
Liverpool eyeing another comeback; Outline plan for return of club rugby 07:35
Seán Moran: DRA saving the GAA a lot of money for 16 years 06:00
Sarah Lavin bidding to clear last hurdle on the way to her Olympic dream 06:00
Basketball’s loss is rugby’s gain as Lauren Delany makes up for lost time 06:00