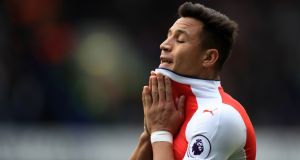 Arsenal manager Arsene Wenger has said that Alexis Sanchez will stay at the club for the new season. Photo: Adam Davy/PA Wire

Arsène Wenger has described Neymar’s impending £198m transfer from Barcelona to Paris St-Germain as “beyond calculation and beyond rationality”, as he declared the deal to be the consequence of when “a country owns a club”.

PSG have been owned by Qatar since 2011, when Qatar Sports Investments became their majority shareholder, and they have made their clout felt in the transfer market. The move for Neymar, though, has put everything else in the shade and Wenger believes it represents a show of Qatari pride and strength.

“For me, it is the consequence of the ownerships and that has completely changed the whole landscape of football in the last 15 years,” Wenger said. “Once a country owns a club, everything is possible. It becomes very difficult to respect the financial fair play because you can have different ways or different interests for a country to have such a big player to represent a country. It can’t justify the investments and looks unusual for the game.

“Apart from that, we are not in a period any more where you think, in some places: ‘If I invest that, I will get that back.’ We are beyond that. The number today involves a lot of passion, pride, public interest and you cannot rationalise that anymore.

“It also looks like the inflation is accelerating. We crossed the 100m line last year and, only one year later, we’re crossing the £200m line. When you think that Trevor Francis was the first £1m player [when he joined Nottingham Forest from Birmingham City in 1979] and that looked unreasonable, it shows you how much distance and how far we have come, how big football has become. It’s beyond calculation and beyond rationality.”

Neymar is set to earn around €30m a year after tax, which is equivalent to around £520,000 a week. Wenger was asked whether he considered the wage to be obscene. “You don’t look at the numbers in their absolute value any more,” he said. “Football has been for a long time out of normal society and the numbers are like the NBA in basketball, so it’s not comparable to normal life anymore.

“It was already out of context of society so, after, it just becomes a bit extra. You cannot calculate what it brings in anymore. It’s just a number. We still live with rationality. We are not the only ones. I think 99% of the clubs do that but, of course, we cannot compete at that level.

“Today, a player is worth what the club can afford to spend and I would say that the price of a player depends on the identity of the buyer. You cannot put it in the context of the market. It is the financial potential of the buyer that decides the price of the player.”

Wenger oversaw an open training session at the Emirates Stadium on Thursday, ahead of the Community Shield against Chelsea on Sunday, and the club’s members enjoyed the sight of Alexis Sánchez tearing about at full throttle. Sánchez, who wants to leave the club, had reported for the start of his pre-season work on Tuesday, after an extended leave following his involvement with Chile at the Confederations Cup and an ill-timed bout of flu.

Wenger said that he had spoken face-to-face with Sánchez but he refused to say whether the forward had told him that he wanted out. One consequence of the Neymar deal is that PSG will no longer be quite so keen to sign Sánchez but Manchester City still want him. Wenger remains adamant that Sánchez will stay at Arsenal for the final year of his contract.

“I will not give anything away on that [whether Sánchez has asked to leave] but the only thing I can tell you is that he is focused, and my decision is clear – he will stay and he will respect that,” Wenger said. “It is as simple as that.

“The frame of mind of a football player is quite easy. Once you go out and play, you focus on the game and you enjoy it. This is a thing that passes quickly, so enjoy every single moment. He loves so much the game and what he does.

“Has he indicated he will sign a new deal? That is, again, something that I do not want to come back on. Every negotiation has to be a little bit secret. The transparency of society is very pushy but we have to resist a little bit, as much as we can. We know as well we have a duty to inform people but to talk about some things is not information any more – it is suicide.”

Sánchez is not expected to start against Chelsea at Wembley. “We want not to take as big a gamble on the player who has just come back and, for us, it is important to build his fitness and to put him in a reasonable condition before we expose him to tough tests,” Wenger said. Guardian Service

1 Germany well ahead of the curve as Bundesliga gears up for return to action
2 US Masters 2019: Hole-by-hole guide to Augusta National
3 Conor McDonald: ‘People in fitness industry need to be careful what they put online’
4 My favourite sporting moment: Roscommon minors restore pride to a county
5 Trevor Francis 40 years on from breaking ‘magical’ £1m barrier
Real news has value SUBSCRIBE